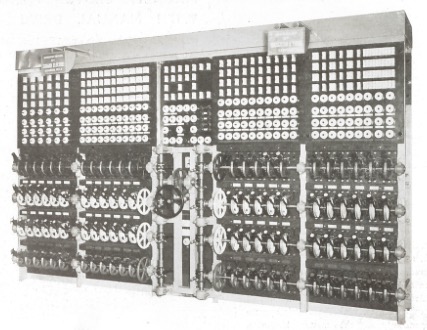 The first was installed in Halifax, second at The Shakespeare Memorial Theatre in Stratford-upon-Avon. A standard board was around 56 ways.
The largest was 130 control channels controlling 175 dimmers at the Royal Opera House in London (1934).
One of the last to be installed was the 90 way Grand Master for the Opera House Blackpool in 1938. It was 13ft.6ins wide and 7ft.10ins high (4.1m x 2.38m) and was sited on a platform in the prompt corner. Two operators were usually necessary.
The Grand Master at the Bristol Hippodrome was installed in 1948 and in regular use until it was replaced by a Duet in 1980 (see journal article 'Farewell Old Friend' for full details)

Grand Master from the Fortune Theatre
From Gaiety Theatre Collection