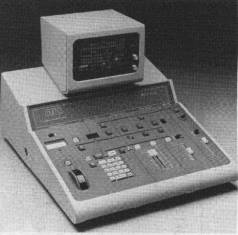 48, 60, 62, 120 max channels
The table-top console for up to 120 channels with up to 199 fast-access CMOS memories. The keyboard provides advanced channel, channel sequence and memory group selection for fingertip control by Strand fader wheel or direct entry of intensity levels.
There are two playbacks controlled by a dipless crossfader, split to give separate control of increasing and decreasing intensities, and also a sophisticated timed playback for autofades at recorded fade times in any prerecorded cue sequence. The free-standing VDU Mimic shows the intensity levels of all channels in precise detail and the state/content of all master functions. Optional peripherals include Floppy Disc Unit for bulk/repertoire memory storage, recordable 2-preset fader wing, and hand-held Rigger's unit.
Analogue output only (0 to -10V)

Followed by the Satellite, Octet, and replaced by the Gemini.

The 216th Duet was installed at Buxton Opera House in 1981, in one of the circle boxes stage right, replacing a Strand Bracket Handle board which was installed in 1938 (see Duet At A Spa article).

Duet 2 Console
From The NEET Collection