Opened in 1903 as the “New” Theatre. It was renamed the “Albery” 70 years later as a tribute to the late Sir Bronson Albery under whom it had such a distinguished history-today continued under the direction of his son, Sir Donald Albery, and grandson Ian Albery. (From TABS Autumn 1977). 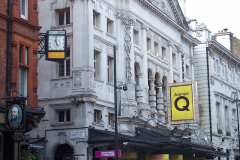 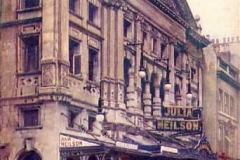 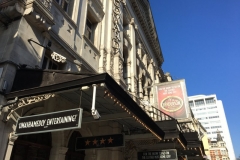 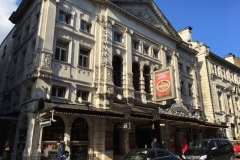 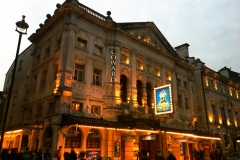 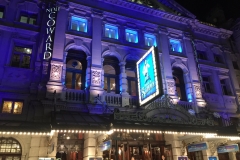 Formerly The New Theatre and The Albery Theatre

Due to bomb damage, the Old Vic and Sadler’s Wells companies moved to The New Theatre in 1941.

Changed name to The Albery, to commemorate Mary Moore’s son, Bronson Albery, who presided over its fortunes for many years and was later succeeded by his son Donald, and grandson Ian. The Albery family made a unique contribution to the history of the theatre as both managers and producers between 1903 and 1987.

The ‘Electronic’ Thyratron dimmer installation was replaced in 1955 with electromechanical servo dimmers due to a problem with ‘singing’ lamp filaments. (awaiting confirmation)

From ‘Yesterday’s Lights’ by Francis Reid
24 October 1961
154-way electro-mechanical dimmer bank. Mainly resistance dimmers but 12 transformer dimmers (max load 2kW) for certain dip and fly points. Dimmer bank situated at fly floor level. Desk in room at back of stalls. View of stage impaired by overhanging balcony.
Desk arranged as 2-wings with preset levers and centre section with master controls. Each preset lever has grouping switch for off, master & independent. Each row has section switches enabling that row to be independent if desired. Centre panel master panel contains motor switch for running dimmers to left or right desk settings. Also motor speed adjustment from 3 to 45 seconds and impulse timer for ‘inching’ longer cues. Meters indicate progress of cues. Switching provided for auto-colour change but not in use.
This system enables two complete changes of lighting ahead of the lighting in use to be set up in advance. Since many cues only involve a limited number of circuits, several other cues can be wholly or partly set up in advance, and during ‘Oliver!’ it was often possible to have 5 of 6 cues set up in advance. Without this facility it would have been impossible to carry out the lighting exactly as required by the producer and lighting director.

Mentions of The Noel Coward Theatre in indexed journals

1903 The New Theatre opened with a revival of Rosemary by Louis N Parker and Murray Carson in which the co-directors Sir Charles Wyndham and Mary Moore starred.

1905 Fred Terry and Julia Neilson first staged The Scarlet Pimpernel here. It proved so popular that it was revived annually for seven years.

1920 Noël Coward made his West End debut as Bobbie Dermott in his own play I’ll Leave It to You.

1924 Sybil Thorndike created the role of Joan in G B Shaw’s play Saint Joan. It was described by the Daily Mail as ‘one of the great performances of our time’.

1926 Margaret Kennedy and Basil Dean’s play The Constant Nymph had a great success with both Noël Coward and subsequently John Gielgud taking the part of the composer Lewis Dodd.

1933 John Gielgud appeared at the theatre in the play that established him as a star, Richard of Bordeaux which ran for 472 performances. He continued to appear there for more than three years in a number of plays including Queen of Scots, Hamlet, Noah, Romeo and Juliet and The Seagull.

1941 The theatre became home to the Old Vic and Sadler’s Wells companies when their own theatres were bomb damaged. The Vic-Wells ballet gave their first West End performance of a triple bill starring Margot Fonteyn and Frederick Ashton on 14 January. The numerous star-studded Old Vic productions included Ralph Richardson as Peer Gynt and Laurence Olivier as Richard III.

1949 Laurence Olivier and Vivien Leigh starred together in The School for Scandal, King Richard III and Antigone. The former had costumes by Cecil Beaton and music by Thomas Beecham.

1950 London premiere of T S Eliot’s comedy of manners The Cocktail Party based on Alcestis by Euripedes, starring Rex Harrison as The Unidentified Guest and Margaret Leighton as Celia.

1952 Katharine Hepburn made her West End debut as Epifania in The Millionairess. Shaw had himself described her as ‘the born decider, dominator, organiser, tactician, mesmeriser’.

1960 Oliver! opened on 30 June with an advance of just £145. The opening cast included Ron Moody as Fagin, Georgia Brown as Nancy and Barry Humphries as Mr Sowerberry. The show ran until September 1967, by which time it had notched up 2,618 performances.

1973 The theatre changed its name from the New to the Albery to commemorate Mary Moore’s son, Bronson Albery, who presided over its fortunes for many years and was later succeeded by his son Donald, and grandson Ian. The Albery family made a unique contribution to the history of the theatre as both managers and producers between 1903 and 1987.

1973 Joseph and the Amazing Technicolor Dreamcoat written by Andrew Lloyd Webber and Tim Rice had commenced life as a 20-minute ‘pop cantata’. By the time it reached the Albery it had doubled in length and was performed with another piece, later phased out, entitled Jacob’s Journey.

1977 Cameron Mackintosh presented a revival of the original production of Oliver! using the famous Sean Kenny sets. It starred Roy Hudd as Fagin and ran for three years.

1981 The romantic drama Children of a Lesser God won Oliviers for Trevor Eve and Elizabeth Quinn as well as the Best New Play Award.

1994 A Month in the Country with John Hurt and Helen Mirren was the Albery’s most successful play ever. Mirren’s personal success as Natalya Petrovna led to her Broadway debut the following year.

1995 Members of the cast and audience did the conga around the theatre in Five Guys Named Moe which was written by Clarke Peters as a tribute to jazz-blues musician Louis Jordan.

2001 Lindsay Duncan and Alan Rickman took London by storm with their modern, highly charged performances as Amanda and Elyot in Coward’s Private Lives.

2005 On 19 September the long lease on the theatre reverted from the Ambassador Theatre Group to Delfont Mackintosh Theatres.

2006 The theatre changed its name to the Noël Coward Theatre when Avenue Q opened on 1 June. This Tony Award-winning musical ran for almost three years before transferring to the Gielgud Theatre.

2011 The Moscow-based theatre company Sovremennik gave the first London season by a major Russian company for over 20 years.

2012 For the first time in their 30-year history, LIFT presented a show in a conventional West End venue. The eight-hour-long Elevator Repair Service production of Gatz was described by Ben Brantley as ‘The most remarkable achievement in theatre not only of this year but of this decade’.