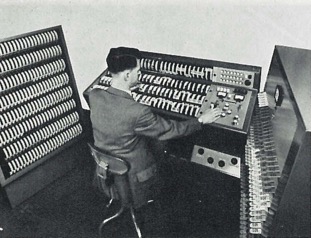 Electro-mechanical remote control (120 channel)
The first System CD went into the Palace Theatre, at the same time as the last Light Console was being installed in Warsaw. Brian Legge was involved in the installation of both.
The first theatre to use System CD outside the West End of London was the Sunderland Empire (1959/60).
The final System CD installation was at the rebuilt Abbey Theatre, Dublin.

Notes by Brian Legge:
This is the Strand Electric Console Preset (System CD) remote lighting control, the type installed between 1956 and 1966 in virtually all the major theatres, and most of the first ITV Studios.
The remote power handling dimmers were magnetic clutch driven resistance or transformer dimmers.
Essentially this console was used only to change the lighting and such changes were limited to those control channels which had been selected to change by selecting the associated stopkey, either manually or magnetically by the internal 3-dimensional latching memory preset and recalled by the group of 15 round push buttons at the right hand side.
It is not surprising it looks like an organ because all except the fader levers were manufactured for Strand by John Compton Organ Company - crafted would be a better word because each was made by just one man who started by choosing the timber, made the very intricate memory boxes and did all the interconnection wiring, and signed it internally.
The first one was for the Palace Theatre, London, the last for the rebuilt Abbey Theatre, Dublin.
The forerunner was the Light Console, employing similar technology, but without fader levers to preset precise intermediate intensity levels - this had an organ-type keyboard, but with 12 keys to an 'octave'. These keys were in effect submasters for same coloured stopkeys. As such it was ideal for fast, broad effects. The most famous of the previous generation was at the London Palladium where it was in full view at the end of the circle.
It was the introduction of Thyristor Dimmers, variable load and far more compact but requiring a continuous control signal that marked the end of this type of selective control. Dimmer intensity memory was the solution but today we tend to forget how expensive bit-memory was initially.