The Phantom of the Opera

Theatrecrafts.com > Shows > The Phantom of the Opera 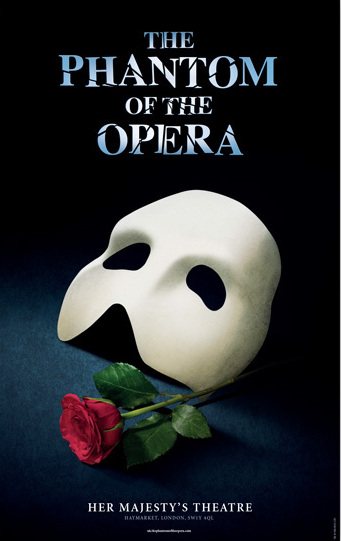 Unlike the previous version of London’s Phantom, the new production makes extensive use of LED and moving lights, to expand the capabilities of the limited space available, while still maintaining the feel of the original. There are no flashy moving lights swinging around, but snap blackouts are now more snappy, due to the LEDs being capable of an instant blackout, with no filament fade. 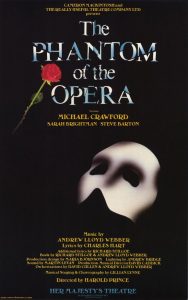 The Phantom of the Opera poster, London, 1986

Previews began September 27, 1986. The show officially opened on October 9, 1986.
The production celebrated its 10,000th performance at the matinée on 23 October 2010.
The run ended with the performance on 15th March 2020 when the coronavirus pandemic forced closure of UK theatres on 16th March. The ending of the run was confirmed in July 2020, and the chandelier was seen leaving the building so it can be refurbished.
The Phantom will return, but in a different version of the show.

(as of December 2016, from the Phantom Twitter LX Department takeover)

Control: Strand 520i, running two universes. There are 203 numbered cues (from 2 to 205) but there are many ‘point’ cues in between them.
Dimmers: 290 dimmers, in (vintage!) Strand STM Racks The Strand dimmers were replaced with ETC Sensor racks in 2018
Lanterns: The stock ranges from (relatively) new ETC Source 4, through to Strand Patt.23 and Patt.223 which are visible on the circle front bar. There are also Prelude Fresnels.
There are 6 follow spots on the show – two front of house (in the traditional position) are Robert Juliat Aramis spots, and are re-lamped every 300 hours (the rated life of the lamps is 500 hours, but it would be a problem if a lamp failed during a show). There are also 4 beam lights used to subtly highlight the performers, two next to the boxes in the upper circle, and two on stage. They provide a wonderful glow.
Effects:
Smoke: The low fog machines are cooled by a twice-weekly delivery of CO2.
Intelligent Lights: There are no intelligent fixtures or moving lights in the rig (other than the chandelier and some candles!). The only DMX-controlled fixtures are strobes, smoke machines and colour scrollers. The organ, chandelier and candles are rechargeable practicals, and are charged after each show.
Flames: The flames in the stage are butane-fuelled pots from Event FX.
Pyro: Miniature detonators are used for the skull stick and the exploding candle, to ignite the flames. Le Maitre Pyroflash pots are used for the chandelier plug (silverstar) and for the star trap (theatrical flash).
The electrical props and effects were built by Howard Eaton (now Howard Eaton Lighting Ltd). As Phantom shows have sprung up around the world, advances in technology have filtered into all of the productions. LED flash effects in the chandelier were introduced for the Las Vegas shows, and are now incorporated into all of the venues. Before these, old-style camera flash bulbs were used, which had to be replaced after each show.
Staff: There are 10 LX staff on each show; 2 spots in the box, 2 spots in the auditorium, 2 spots upstage of the pros arch, 2 on-stage LX, 1 LX dayman and 1 board operator. The staff are all ‘swings’ and can swap around to do whatever task is required on each show.
Automation: In New York, the control computer for the chandelier is vintage 1988, and still runs on MS DOS 3.1 (before Windows!)

(from Lighting & Sound International, Issue 15)
“North London-based Theatre Projects have been making the news as far as major events are concerned. Their largest installation to date was for the ‘Phantom of the Opera’ at Her Majesty’s Theatre where nearly £250,000 worth of sound equipment took Derrick Zieba and his team of engineers two months to install. The project involved 108 separate loudspeakers, two 8-track tape machines, 17 radio mics, and a 54-channel computer controlled mixer. Sound design was by Martin Levan….”
Levan’s design used open drivers – Dual Concentric Drivers, out of their usual enclosures.

The show was closed for 3 days in May 2008 to allow for an upgraded system to be installed.  £400,000 was spent on the upgrade which included more than six miles of cable and 120 speakers throughout the auditorium.
See The Guardian article. Meyer UPQ-1P speakers (launched in 2008) were heavily used in the new system design, by Mick Potter.

The original orchestra was 27 musicians.
When the production reopens in 2021 it will be cut down to just 16 musicians.

The ‘Masquerade’ ball staircase was built by Delstar Engineering. It is stored vertically in the flies flat-packed until it’s needed. 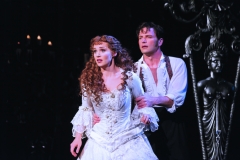 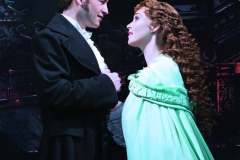 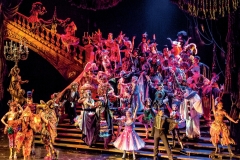 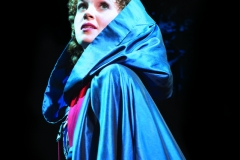 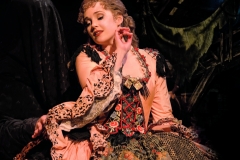 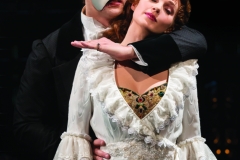 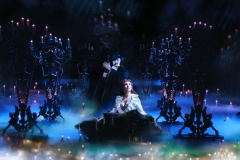 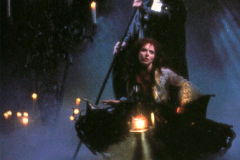 Phantom of the Opera – US Tour

The show featured updated technology and effects, including a re-engineered chandelier capable of reassembling in midair during the overture while the entire interior of the venue (not merely the stage) returned to its 1880s halcyon days.

Phantom of the Opera

Although the exact implementation of the effects at a professional level is expensive, many of the effects from the show can be approximated with readily available equipment.
The magician Paul Daniels was involved in designing at least one of the illusions for the West End production.