Designed by Frank Matcham for Oswald Stoll, this is the largest theatre in London, at 2359 seats. There are no pillars to block the view from any seat.
Widest Proscenium opening in London at 55 feet wide, 34 feet high.
The first theatre in Europe to provide elevators to take the audience to the upper levels of the house.
The first theatre in England to have a triple revolve on stage.
Apparently one of the first places in the UK to sell Coca-Cola.

1904 – 1933 – Variety shows, musical comedies, stage plays
1933 – 1934 – Talkies arrived and films were shown for a year, including the RKO classic King Kong
1934 – 1961 – Variety shows, musical comedies, stage plays
1961 June – 1963 – Cinema – The theatre was leased by MGM after a run of poorly-received musicals ended.
1963 July – 1968 – Leased by Cinema to become the second of London’s Cinerama locations. Renamed the Coliseum Cinema.
1968 – Sadlers Wells Opera company moved in, after a large orchestra pit had been installed, and the house was fully restored and redecorated.
1974 – The Sadlers Wells company changed it’s name to the English National Opera
2000 – 2004 – Extensive renovation, with design team RHWL as architects and Arup as acousticians and engineers.
Currently, the Coliseum is still the home of the ENO and is also the home of English National Ballet. 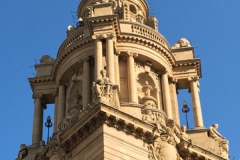 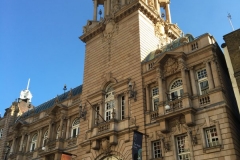 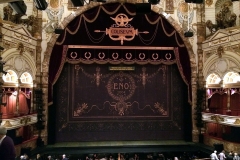 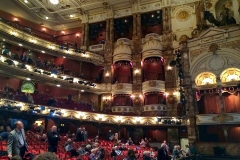 Links to information about equipment at London Coliseum over the years

The first theatre in England to have a triple revolve on its stage, although this was rarely used.

Huge stage space – 55 feet wide by 92 feet deep, flat floor (non-raked) stage. The widest proscenium arch in London. One of the first to have electric lighting.

The theatre was listed by English Heritage in September 1960.