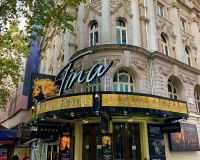 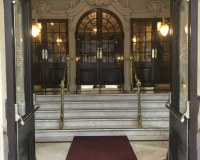 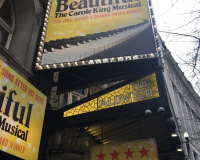 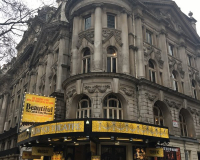 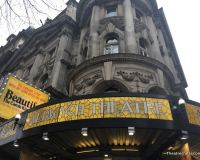 From ‘Yesterdays Lights’ by Francis Reid
27 October 1961
Control desk: Strand CD/TH/II.
120-way electro-mechanical dimmer bank with servo clutches operated via polarised relays. Mainly resistance dimmers of 500W/1kW and 1/2kW capacity but 8 transformers of 2kW capacity providing infinitely variable load conditions on certain fly and dip plugs. Dimmer bank under stage.
Console situated in OP box next to stage, giving a side view of apron stage and restricted view of main stage – but feeling of contact with the stage. Also, being on the opposite side of the stage to the stage manager in the prompt corner, operator and SM have view of the entire stage area between them. Nevertheless, console operator cannot judge total effect of the lighting.
Desk is standard layout for Strand CD systems. This is the first (at the time of writing, the only) theatre CD with two complete dimmer presets ahead of the lighting in use. Such consoles are however common in television. The 120 dimmer levers are repeated twice (i.e. a total of 240 dimmer levers) as the white preset and green preset. Push buttons (repeated as foot pushes) will drive either all the dimmers to the levels preset or alternatively only such dimmers as have been selected by the organ type tab switches. Crossfades from white to green and vice versa are possible. Also fades to blackout irrespective of dimmer settings. The circuit selection tabs can be controlled by hand or by the 14 adjustable piston memories. Nine dimmer speeds from 3 to 35 seconds and an impulse timer giving ‘inching’ speeds up to several minutes. Dial indicates progress of cue and on second pressure on dimmer tab will indicate dimmer position. Any single lever can be adjusted independent of setting of rest of board.
Being electro-mechanical, the board has inertia and therefore once a cue is completed, a set of levers is not required to hold a cue. But no proportional dimming and only one motor, so all levers in a cue must move at the same speed. The board performed a 50 cue plot with ease. At no time was the single operator flustered.

Links to information about equipment at Aldwych Theatre, London over the years