The largest stage in the West End, and a superbly rich theatrical legacy makes this venue a very special place to visit. During the run of a show, check out the Drury Lane Tours which are packed with backstage exploration and tell some of the incredible stories associated with the space. (The tours are not available during fit-ups or technical rehearsals).

Source for some of the below: http://www.reallyuseful.com/theatres/theatre-royal-drury-lane/history/

The stage lighting control systems (Grand Master and Light Console) were operated from the stage left wing.
The Grand Master was located on a small platform above the stage left wing, part of which remains to this day.
The Light Console was in a small room between the proscenium and the auditorium, which afforded a view of the stage through a window with a metal shutter. This can be seen in the photo of Ernest Trim below, and in the photos taken in January 2019. The room was more recently used as a base for the on-stage radio mic technician during large shows.

Back with a Vengeance - Durham Marenghi (March 1989)
[LX Plan - click on the thumbnail]
From David W. Kidd Collection

Electrifying Lighting at the Lane (1977)

Clarkson Stanfield and the Spectacularists (1979)

See the separate page about the hydraulic and electric stage bridges that were at Drury Lane until their removal in 2019.

Gone With The Wind Bell – Tradition 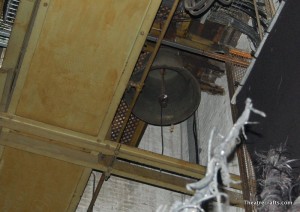 A large prop bell is hung in the upstage left wing, high up above the stage, most likely left over from the 1972 production ‘Gone With The Wind’. The bell is rung with the applause at the end of the final performance of a show’s run at the theatre. It will remain in situ even after the 2019-2020 renovations.

Drury Lane has been called one of the world’s most haunted theatres. The appearance of almost any one of the hundreds of ghosts that are said to frequent the theatre signals good luck for an actor or production. The most famous ghost is the “Man in Grey”, who appears dressed as a nobleman of the late 18th century: powdered hair beneath a tricorne hat, a dress jacket and cloak or cape, riding boots and a sword. The man appears in a particular seat in the upper circle (D1) and stands up and makes his way across the area, before disappearing through a wall. In 1848, the theatre was remodelled and a wall was removed, revealing (according to legend) the skeleton of a man stabbed with a knife, wearing a grey hat, in the exact spot where the ghostly figure disappeared. 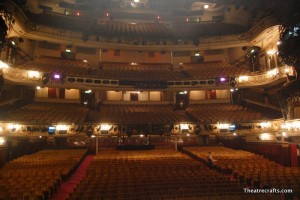 The ghosts of actor Charles Macklin and clown Joseph Grimaldi are supposed to haunt the theatre. Macklin appears backstage, wandering the corridor which now stands in the spot where, in 1735, he killed fellow actor Thomas Hallam in an argument over a wig (“Goddamn you for a blackguard, scrub, rascal!” he shouted, thrusting a cane into Hallam’s face and piercing his left eye). Grimaldi is reported to be a helpful apparition, purportedly guiding nervous actors skilfully about the stage on more than one occasion, and occasionally kicking lazy performers in the rear.
The comedian Stanley Lupino claimed to have seen the ghost of Dan Leno in a dressing room.

History about the Theatre