The Theatre was built by F. H. Fowler and Hill with a seating capacity of 1,200. It was rebuilt in 1907 and still retains its original substage machinery. Its current seating capacity is 786.

Originally known as the Royal Avenue Theatre, then the Avenue Theatre.
Rebuilt in 1905, and reopened as The Playhouse on 28 January 1907. 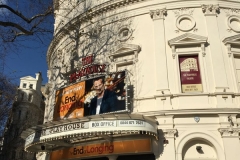 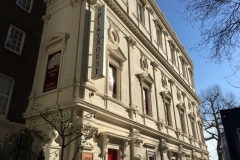 Restored by David Wilmore as part of the refurbishment in 1987.
Listing below from the British Performing Arts Directory 1994

The theatre was initiated in 1882 by Sefton Parry, a speculative theatre builder, who bought the site hoping it would have to be purchased from him by the South Eastern & Chatham Railway Company, whose terminus was alongside. The Royal Avenue Theatre opened on 11 March 1882 with a revival of Offenbach’s Madam Favart. The prefix Royal was soon dropped from the theatre’s name, but comic operas, burlesques and the like remained the staple fare for several years. For much of this time, Arthur Roberts, a popular star of the music halls, led the company at the Avenue.

In the early 1890s the emphasis changed to drama and in 1894 Miss Horniman, the tea heiress, later a pioneer of the repertory movement, anonymously sponsored the actress Florence Farr in a season of plays. Sadly, the first production failed but Miss Farr persuaded her friend, a certain George Bernard Shaw, to finish his play, Arms and the Man, as a speedy replacement and his first West End production. It was successful enough to allow him to drop his music criticism in favour of play writing.

The theatre was rebuilt in 1905 to the designs of Blow & Billerey. During the work, part of the roof of the adjacent Charing Cross railway station collapsed. The roof and girders fell across the train lines but part of the stations western wall also fell and crashed through the roof and wall of the theatre. This resulted in the deaths of three people in the station, and three workmen who working on the site of theatre and injured many more. The theatre was repaired and re-opened as the Playhouse Theatre on 28th January 1907 with a one act play called The Drums of Oudh and a play called Toddles, by Tristan Bernard and Andre Godfernaux.

Since then, the beautiful Playhouse has hosted the likes of WS Gilbert, legendary actress-manager Gladys Cooper, the BBC, The Almeida Theatre Company, The Peter Hall Company, and Janet McTeer. In January 2003, Maidstone Productions became the new independent owners of the Theatre. Maidstone Productions, belonging to London and Broadway producers Ted and Norman Tulchin, has been behind a string of hit productions on both sides of the Atlantic, including Gagarin Way, Eden and Vincent in Brixton in the West End; Yazmina Reza’s The Unexpected Man, as well as Donald Margulies’ Dinner with Friends, which won the Pulitzer Prize. This was in addition to Turgenev’s Fortune’s Fool on Broadway, starring Alan Bates and Frank Langella, both winning Tony Awards for best actor and best supporting actor.

The Ambassador Theatre Group have maintained stewardship of the Playhouse Theatre since 2003 and have recently acquired 100% ownership from it’s partners Maidstone Productions.

Links to information about equipment at Playhouse Theatre, London over the years