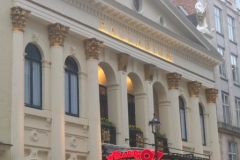 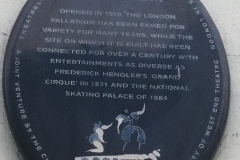 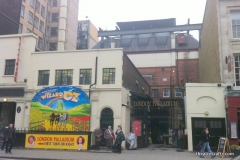 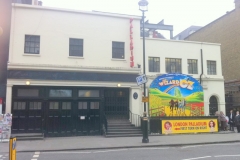 One of the most famous variety venues in the world, the Palladium has been open and showcasing the finest acts and shows for over 100 years.

When the Palladium opened, it had it’s own telephone system, between the boxes.

From The Stage Guide, 1945:
‘Revolving stage’ is mentioned – was this the same three-ring drum revolve mentioned in the 1971 guide?

The outer ring was able to revolve independently of the narrower centre rings, and the middle section could be elevated above stage level.
It was heavily used in the 1991 production of Joseph and the Amazing Technicolor Dreamcoat.

The famous drum-revolve mechanism was finally removed in January 2002, immediately after The King and I closed, to make way for the hydraulic mechanism for the Chitty Chitty Bang Bang car.

Stars at the Palladium

Sir Bruce Forsyth (1928 – 2017), who presented ‘Sunday Night at the London Palladium’ on TV between 1958 and 2000 had requested to have his ashes scattered under the stage at the Palladium. A plaque at sub-stage level commemorates him.

Plaque backstage at the Palladium

Cinderella at the London Palladium as seen in 1966 (British Pathe)

Cinderella at the London Palladium as seen in 1926 (British Pathe)

Links to information about equipment at London Palladium over the years