Architect: Lewin Sharp (1901)
Original Owner: Henry Lowenfield (1901)
Status: Grade II listed building.
Refurbishment Architect: Ernest Schaufelberg (1932)
The first new London theatre opened following the death of Queen Victoria, so the first theatre of the Edwardian age, and the fourth to overlook Shaftesbury Avenue. The balcony level is considered to be the steepest in London, and is currently hidden above a suspended ceiling which was installed after the collapse of part of the ceiling plasterwork, during a performance of The Curious Incident of the Dog in the Night-Time (more information about the ceiling collapse on that page).
Named after Apollo, the Greek god of music and poetry.
The Apollo’s auditorium was split on four levels and had 775 seats. Four hundred and eighty of these are on the stalls/dress circle level. 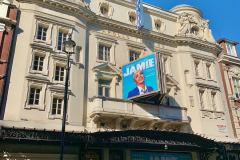 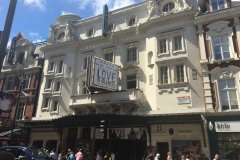 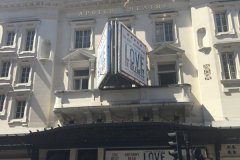 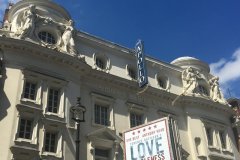 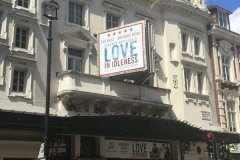 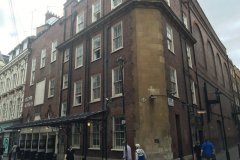 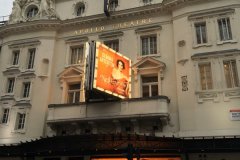 Around 40 minutes into the first act of The Curious Incident of the Dog in the Night-Time on December 19th 2013, a large portion of the ceiling collapsed, leading to over 80 injuries, 7 of which were serious, but not life-threatening.
The cause of the incident was found to be weakened hessian wadding which formed a reinforcing part of the plaster ceiling and which formed ties which held the plasterwork to timber supporting beams. Westminster City Council, which governs the safety regulations for many West End theatres, required checks of the ceiling every 3 years, and the Apollo Theatre checks were up-to-date. The ceiling was original to the theatre (dating from 1901). More strict regulations have been brought in, and all West End theatres of similar age and with similar plaster ceilings, have been checked, to hopefully prevent the accident happening again.
Guardian news article
BBC News article

(partly from http://www.nimaxtheatres.com/apollo-theatre/ by Mark Fox with thanks to George Hoare Space; additional information from LondonTheatre.co.uk)

Links to information about equipment at Apollo Theatre, London over the years