An overview of techniques to help with special needs, mobility issues, language barriers or impaired vision or hearing.
At the bottom of the page we have information about theatre companies that work with performers with special needs.

Many operatic performances are sung in their original language, which may not be the language of the audience. Touring opera companies regularly set up LCD monitors at the edge of the stage so that translations cannot be provided. Permanent opera houses often use surtitles (on screens above the stage). These are known as open captions (OC) as the audience members require no additional equipment to view them.

Some venues provide closed captioning (CC) which often consists of a sheet of semi-transparent mirror which is placed in front of the audience member that would like captions, and reflects a screen at the rear of the auditorium which carries a mirror image (reversed) of the captions.

Captions can be created using a projector and software such as PowerPoint, or a custom-made software tool such as The Difference Engine, which uses a smartphone to deliver the captions. Gala Pro is an app which delivers captions and audio description direct to a users’ mobile device.

The National Theatre in the UK has started to experiment with augmented reality (AR) for the delivery of captions, using Epson Moverio BT-350 Smart Glasses. Those that would like captions get a high quality caption superimposed onto their view of the stage, without disturbing any other audience members.  [Article on TechRadar]

StageText provides captioning services to many shows, including Harry Potter and the Cursed Child

A service greatly appreciated by those with impaired vision, AD involves a describer sitting at the rear of the auditorium (in the booth if there is room) providing a narration describing the action on stage. The skill is in not getting in the way of the on stage dialogue, sound effects or other audible movements on stage, but filling in where vision would help with the plot.

Interpretation: A sign language interpreter stands at the side of the stage, near to seating that has been set aside for those with hearing difficulties, and is illuminated by a spotlight. Throughout the performance, the interpreter signs the lines or sound cues that the audience cannot hear.

Theatre companies such as Deaf West Theatre are transforming the relationship that hearing impaired folk have to theatre, including their groundbreaking version of the musical Spring Awakening, with the performers using sign language throughout (see video below). 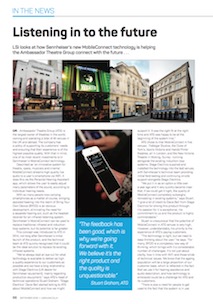 These are available at some venues / performances, and are designed for audience members who are wheelchair users or have a visual impairment, and are often scheduled before audio described performances. The tours offer a combination of sensory experiences where patrons can experience lighting and sound effects and / or an opportunity to handle props & costumes or explore the scenery. Sometimes the actors will also be present to talk about the characters they play and their costumes.

A Relaxed Performance is one specifically modified to help audience members with special needs to feel at home in the theatre, and to enable them to feel able to make noise and comment on the performance when they wish to. They are designed for audience members with autism, learning disabilities and sensory or communication needs. The sound level is often reduced, complex lighting changes are simplified, and the cast and company warn families when unexpected noises will occur. Often the house lights are left on, and the audience is given a pre-show tour of the theatre so that they are familiar with the environment. The performances sit alongside special measures for audio-description and signed performances for those with sight or hearing impairments, and were introduced to the West End in mid 2013.

Inclusive theatre companies that work with performers and technicians with special needs, including mobility needs.
Disability Arts Online is a great resource site listing a huge number of companies and information.