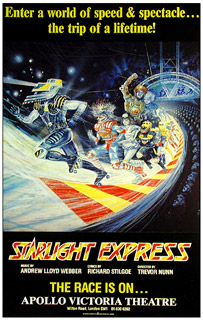 The $8 million budget and $2.5 million set transformed the Gershwin Theatre in 1987.
More information about the Broadway show.

Trailer for the German production – Bochum (2007)

Design by John Napier
The main components of the London set were a series of race tracks / walkways which extended from the stage out into the stalls, fully enclosing a block of seating, and at a higher level around the edge of the grand circle. Extensive alterations were made to the structure of the Apollo Victoria theatre to accommodate these elements. The audience were thrilled to have actors racing past them on roller skates all around the auditorium.
There was also an early example of stage automation, with a large flown bridge which rotated to connect various tracks and parts of the set together. In addition there were mechanical safety barriers which rose around the tracks in the stalls of the auditorium at ‘race time’.

From the 1988 Souvenir brochure:
Having been a member of the original team that put CATS together, when a production about railway trains with all performers on roller skates was suggested, I realised that we were on a very strange adventure without any of the normal rules that apply to staging a musical. Well, it took only a year and the engineering expertise of some of the best people in Britain.
One of the things said is that Starlight is one of the most expensive musicals in theatre. Well, it is. But also, hopefully when people see it, they will realise not only a lot of money was needed but was well spent on metal work and on finding the right people.
The single most wonderful thing in anyone’s career is to work with a group of people that have a vision of theatre and entertainment. After having done CATS, I regard it as a privilege that they would allow me the indulgence of turning another theatre upside down.
I hope most people will not be too disappointed that there isn’t actually a literal manifestation of a railway train. While attempting to design costumes, I had to bear in mind that people not only had to sing and dance, but had to travel at spectacular speeds around this roller coaster.
The intention in appearance is always to try to get the wit and spirit of the audience to make imaginative leaps from people to trains. It’s taken a year, a lot of stress and strain but ultimately, it was fun.
It used to be said that technical achievements could only happen in America. You’ve seen it here first, and it was only through the expertise of an English work force and technicians that it could have been achieved. To them, I say thank you.

Radio microphones were built into the headpieces worn by the actors. 21 mics in total were used. The sound designer, Martin Levan used a large number of speaker cabinets all around the auditorium. This was the debut of Cadac mixing consoles on large West End shows (see Classic Gear article above).

From the 1988 London Souvenir brochure:
Due to the complex control of sound required for Starlight Express a new computer assisted mixing console had to be custom designed and commissioned for the show. New equipment was also designed and built to enable sound to be moved smoothly and quickly around all parts of the theatre. The actors had to learn to use the radio mikes for several weeks prior to opening but there were no problems for the cast when they were moving fast on skates. We had to work closely with Liz Da Costa and the costume department and the mikes have been designed to go into the helmets and wigs. They are the smallest mikes ever to be used in a West End show. Some of the actors did find it difficult wearing transmitter packs if they had not done so before. Andrew Lloyd Webber’s music contains loud dynamic passages and very quiet passages and does demand an extremely high degree o control; therefore the sound system had to be sufficient not to run out of steam.

Music
All of the music for the show was performed by a live band under the stage. The stage extended out over the orchestra pit.

Design by David Hersey
Hersey brought the feeling of a rock concert to the West End stage with his groundbreaking high energy design. The Napier-designed bridge featured a rig underneath it to supplement the main rig when it was flown out.
The moving lights on the 1984 version of the show were controlled from an Apple 2E computer.
The lighting design (along with the running order and content of the show) was revised in London in 1992 to refresh it for a new generation.

From the 1988 London souvenir brochure:
The challenge of lighting Starlight Express is to do with movement and scale. The actors cover huge expanses of track in a matter of seconds. A simple lighting idea of the stalls track involves as many as 120 lighting instruments – two or three ideas use as much equipment as many full scale musicals. The sheer complexity of installing all the lighting equipment took a full crew many weeks working day and night.
The object of the exercise was to achieve a lighting rig which could immediately respond to the movement of the set and the skaters and the emotional mood of the music. To this end we developed a system of ‘intelligent’ spotlights which redirect themselves during the evening and undergo some 40 colour change sequences. A ‘normal’ musical will have between 125 and 175 lighting cue states. Starlight has nearly three hundred. We had to stop when the lighting computer’s memory bank was totally full…

UK Tour
The UK tour in 2005 used 3D projection (as did the previous US tour). The high energy races were pre-filmed, and relayed via 4 digital projectors to a back projection screen flown downstage. More. See also the LSI article above.

German Production – http://www.starlight-express.de/
The Starlighthalle venue in Bochum, Germany was built specially to incorporate racetracks and a large stage area to accommodate this show, in less than a year. Between June 1988 and June 2008 more than 12 million people saw the production.

The team behind Starlight Express, now in its 17th year at London’s Apollo Victoria Theatre, have decided to update the show’s lighting rig. After adding High End Intellabeams back in 1993, lighting designer David Hersey and the show’s original production electrician, Howard Eaton, returned this year to update the lighting rig once again. This time they opted to replace the Intellabeams with equipment from Martin Professional.
The Moving Light Company were called upon to supply the production with 24 Martin MAC 500s and three of the new MAC 2000 units. In addition, they supplied two DHA Pitching Digital Light Curtains, which provide a dramatic new way of lighting the spectacular bridge which forms the centrepiece of John Napier’s set design. The changes to the lighting rig were made in a tight 10-day period when the production closed temporarily to allow the auditorium to be re-carpeted and re-seated, during which time Eaton and his team also took the opportunity to upgrade the dimmers and lighting control system, with the rig now controlled by the Rosco-ET Horizon lighting controller.
Horizon programming was in the hands of Robert Bell, one of the creators of the WYSIWYG lighting visualisation software and now Horizon’s product manager, who worked with David Hersey and Howard Eaton to relight the show using the new equipment in a very hectic final three days.