Music by Andrew Lloyd Webber
Based on ‘Old Possums Book of Practical Cats’ by T.S. Eliot

(from Wikipedia) Cats premiered in the West End at the New London Theatre on 11 May 1981. There was trouble initially as Judi Dench, cast in the role of Grizabella, snapped her achilles tendon during rehearsals prior to the London opening. The role of Grizabella was subsequently taken over by Elaine Paige, who only had 3 days of rehearsal before beginning previews. The role was beefed up for Paige and the song “Memory” (originally to be sung by Geraldine Gardner in the role of the red cat Bombalurina) was given to Paige. The musical was produced by Cameron Mackintosh and Lloyd Webber’s Really Useful Group, directed by Trevor Nunn, with associate director and choreographer Gillian Lynne, design by John Napier, and lighting by David Hersey. It played a total of 8,949 performances in London. Its final performance in London’s West End was on its 21st birthday, 11 May 2002, and broadcast on a large screen in Covent Garden to the delight of fans who could not acquire a ticket for the final performance. It held the record as London’s longest running musical until 8 October 2006, when it was surpassed by Les Misérables. 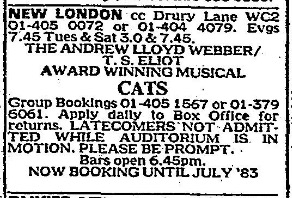 The front section of stalls seating was built onto the revolve that was part of the New London Theatre, and patrons seated in that section entered via the stage, and took their seats facing downstage. The auditorium was revolved into it’s correct position during the overture, revealing the set to the rest of the audience. It led to the wonderfully enticing newspaper advert shown left, warning that ‘Latecomers not admitted while auditorium is in motion’. Who could resist! 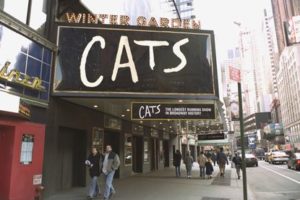 The show made its debut on Broadway on 8 October 1982, at the Winter Garden Theatre with the same production team.
On 19 June 1997, Cats became the longest-running musical in Broadway history with 6,138 performances. It closed on 10 September 2000, after a total of 7,485 performances. Its Broadway record was surpassed on 9 January 2006 by The Phantom of the Opera. It remains Broadway’s second longest-running show in history. Lloyd Webber stated that when the original show was produced, it cost £900,000, but on Broadway, it cost $5,000,000.

In 1998, Lloyd Webber produced a video version of Cats, based upon the stage version, starring Elaine Paige, who originated the role of Grizabella in London; Ken Page, who originated Old Deuteronomy on Broadway; Sir John Mills as Gus; Michael Gruber as Munkustrap; John Partridge as The Rum Tum Tugger; Jo Gibb as Rumpelteazer with many of the dancers and singers drawn largely from various stage productions of the show. It was directed by David Mallet, with choreography and musical staging by the show’s respected original creator Gillian Lynne in London’s Adelphi Theatre, and was released on VHS and DVD, as well as broadcast on television worldwide. Andrew Lloyd Webber and others on the production team for the film wanted to keep the feeling that viewers watching the film could still get the sense of seeing the show live, by having all views be facing the stage, therefore, getting multiple views of the set, with several close-ups.

The lighting plan by David Hersey can be viewed on the Backstage Heritage Collection.

Director Tom Hooper revealed his vision of a high-tech CGI-enhanced neon-lit world of Cats, and was met with a series of negative reviews, and bemusement across social media. The essential problem appears to be the use of computer-graphic fur to make the human performers into some hybrid creature with some feline characteristics and some human. The costumes in the London & Broadway versions, by the overall show designer John Napier, worked phenomenally well on stage, to signify ‘cat’ but still allow a full range of movement for dance. This was, after all, a fully-theatrical song and dance show, which used some beautiful imagery and song to tell a (admittedly fairly shallow plot-wise) story about the behaviour of our feline friends. Removing the theatricality and making them a hybrid furry human has completely missed the point of what made the show a success.