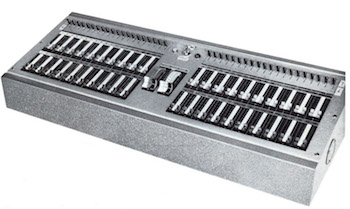 20,30,40 channel 2-preset in table / wall-mount desk.
40,60,80 channel 3-preset in seated desk.
Two groups or both common to all presets originally by twin pushbutton, later 3-position toggle switch. Linear motion master faders with quadrant scale.
Designed for use with JTM Thyristor dimmers.
The last 3-preset version was built in 1976. The 2-preset version continued until 1979, when it was replaced by the AMC.