Formerly named The Royalty Theatre, this 999-seat theatre was built in 1960, as part of a development replacing the Stoll Theatre (see below), which was demolished in 1958. The Royalty Theatre was almost immediately used for cinema presentations, as MGM took over the running of the venue in 1961.

It was used almost exclusively as a cinema for many years, showing films in the Cinerama and then 70mm formats. It closed as a cinema in 1969 and returned to live theatre use.

In 1980 it became the venue for the taping of the TV show This Is Your Life, after Cats took up residence in the New London Theatre, which was used between 1978 and 1980. The show used the Royalty Theatre until 1988.

The venue is currently part of the London School of Economics, and was renamed The Peacock Theatre by them. It is used as a lecture theatre during the day, and by the Sadlers Wells Company for dance-related performances and visiting productions in the evenings. 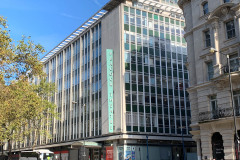 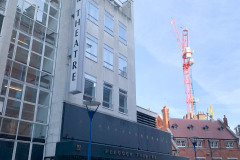 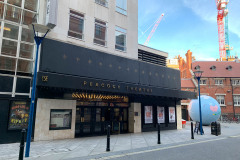 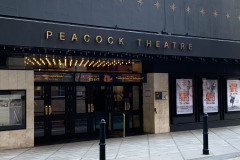 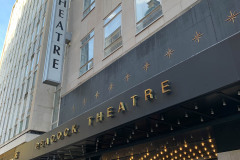 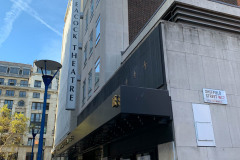 The Peacock Theatre is most noted as the home of one of the West End’s most unusual ghosts, a dolphin commonly known as ‘Flipper’. An urban myth has grown up that, during one of Paul Raymond’s revues at the theatre in the 1970s, a dolphin was kept in a tank beneath the stage, where it lived permanently and later died from neglect. In fact, this is not true. Two dolphins called ‘Pennie’ and ‘Pixie’ were indeed kept in a tank at the theatre for three months for a show called ‘The Royalty Folies’, which was later renamed ‘The Great International Nude Show’. However, neither of these animals died while at the theatre and at the close of the show the animals were moved to a dolphinarium in the Far East.
The remnants of the tank and its lifting equipment still remain below the stage and numerous visitors to the theatre claim to have heard in the vicinity a spectral squeaking, not unlike a crying baby. One possible explanation is that the London Underground Piccadilly line Aldwych spur used to pass very close to the sub-stage areas of the theatre and it is noise from the tunnels that created the sound.
(from Wikipedia)

Mentions of The Peacock Theatre in indexed journals

Originally opened in 1911 as the London Opera House – a rival to the Royal Opera House – built by the American impresario Oscar Hammerstein.
The procenium opening was 44 feet and the stage was 83 feet deep.