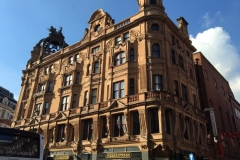 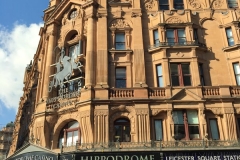 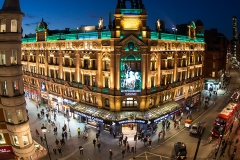 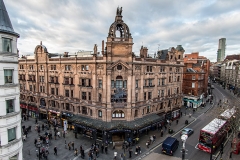 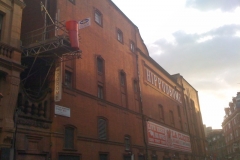 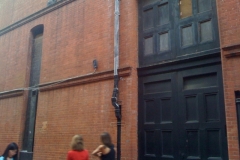 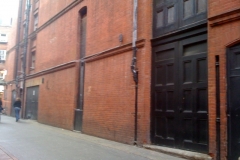 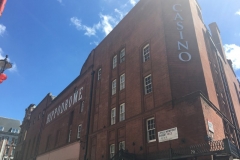 Opened on January 15, 1900, the circus variety theatre was designed for Edward Moss by the renowned theatre architect Frank Matcham. The first shows made use of the 100,000 gallon tank in which polar bears and sea lions would swim.
The opening  night programme featured a number of circus acts (including acrobats, wire acts, a ‘screamingly funny Bucking Mule’, cats & dogs, 21 lions, horse-riding, and a musical show Giddy Ostend, starring music hall performer Little Tich. There’s no evidence that a young Charles Chaplin featured.
The water tank was illuminated and was able to produce water fountains that shot water to the roof.
A troupe of acrobatic dwarves used to dive from the Minstrel’s Gallery at the top of the building into the pool.
Initially, the orchestra was located in the grand circle, not in an orchestra pit in front of the stage.

In 1904, a Chronophone was on the bill, which featured projected films synchronised with sound played from a disc (years before the system was perfected with releases such as The Jazz Singer (1929)).

In 1905/06, during the construction of Leicester Square tube station, it is thought that part of the elephant run had to be removed from the basement of the Hippodrome to make way for the ticket hall and escalators. [to be confirmed]

The Hippodrome closed in Spring 1909 for extensive alterations, after ‘an unbroken run of nearly ten years, during which time 5760 performances were given’ (The Observer, July 18 1909).
The venue reopened on 2 August 1909 after £40,000 worth of work to enlarge the stage and advance the proscenium to suit the theatre for variety rather than circus use and, from 1912, revue-style performances.

Harry Houdini performed some of his final and most spectacular acts at the Hippodrome.

Tchaikovsky’s Swan Lake had its UK debut at the Hippodrome in 1910.

1921: A variety show ‘The Peep Show‘ featured a scene called The Valley of Echoes, featuring lighting effects by ‘Wizard of Light’ Adrian Samoiloff.

1947 – 1948 – Starlight Roof
Julie Andrews made her professional solo debut (as ‘The Youthful Prima Donna’) singing the aria ‘Je Suis Titania’ from Mignon as part of a musical revue called Starlight Roof on October 22, 1947. She was still on the programme by May1948.

In the 1950s the Hippodrome was transformed into the legendary Talk of the Town, and featured a host of major stars from throughout the world including Shirley Bassey, Judy Garland, Sammy Davis Jr, The Jackson 5 and Tom Jones. This continued until 1982.

After various different reincarnations, including a nightclub under the management of Peter Stringfellow, in 2008 the venue returned to its roots as a circus venue for burlesque cabaret La Clique, which closed in June 2009.

Work to transform and restore the building began in 2009.

Links to information about equipment at London Hippodrome over the years

1922 – Jack and the Beanstalk at the London Hippodrome