Arthur Earnshaw was a theatre electrician here when he founded Strand Electric with Phillip Sheridan in 1914. 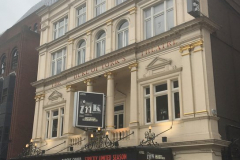 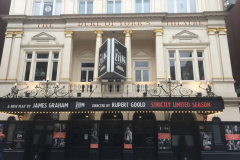 The theatre has twice suffered from flooding and had to cancel shows.

The theatre, which opened on 10 September 1892 with Wedding Eve, was built for actors Frank Wyatt and his wife, Violet Melnotte. Initially called the Trafalgar Square, the name was shortened to Trafalgar in 1894 and the following year became the Duke of York’s to honour the future King George V. In 1900, Jerome K Jerome’s Miss Hobbs was staged as well as David Belasco’s Madame Butterfly, which was seen by Puccini, who later turned it into what is probably his most famous opera; it was ultimately performed at the Duke of York’s in 1932 by the Carl Rosa Opera Company.
The 1930s brought a number of interesting seasons, amongst them, Grand Guignol, The Ballet Rambert and the notable appearances of Markova and Dolin which greatly helped to popularise ballet in England. In the late 1970s the freehold of the theatre was purchased by Capital Radio and it closed in 1979 for refurbishment. It reopened in February 1980 and the first production under the aegis of Capital Radio was Rose, starring Glenda Jackson. Other successes include Al Pacino’s award-winning performance in David Mamet’s American Buffalo, Richard Harris’ comedy Stepping Out, directed by Julia Mackenzie and Willy Russell’s Shirley Valentine.

Past Productions (some from http://www.dukeofyorkstheatre.co.uk)