The DSM (Deputy Stage Manager) is responsible for giving calls over the front-of-house and rear-of-house systems before the performance begins.

Alternative calls: “Curtain in Fifteen” is used in the USA in some venues, and “Places” is called instead of ‘Beginners’.

The cans are the theatre’s headset communication.
The system is known as ‘Comms‘ or ‘Headsets‘ in some venues.

The Deputy Stage Manager (DSM) or ShowCaller calls cues for the show, using the prompt book, where the cues are written in, adjacent to the appropriate line / action. Each cue is numbered, and is preceded by the appropriate department responsible for enacting the cue:
LX – Lighting (short for Electrics)
Sound – Sound cues / playback (live sound mixing usually happens off-cans)
Auto – Automation – motorised scenery
Fly – Anything operated from the fly gallery – scenery flying in and out

Each cue is preceded by a warning that the cue is coming soon, to let the operator know they should standby for the cue.
These cues are known as ‘StandBy’ cues. Some venues in the US call them ‘Warn’ cues, and sometimes the Warn cue is used as a ‘pre-standby’ to give even more notice that a cue is coming.

It is very important that the “Standby” is given at the start of the phrase, and the “Go” is at the end of the phrase. “Go” is the only word that can be used to initiate a cue. “Fade”, “Stop” are NOT appropriate.

If the operator needs a reminder of what the cue actually does, then the following are appropriate.
“Sound Q 12 which is a fade, Go”
“Sound Q 13 to cut the music, Go”

Where possible, one obvious action word should be used. This word should usually be “Go”.
Avoid using the word “Go” in any conversations.

Every cue should have a standby.

The lighting operator will then respond ‘Standing By’.

A few seconds prior to the cue:

Then at the cue point:

The headsets are extremely sensitive, and can detect the slightest whisper. All operators should talk quietly, so that you can all turn your listen volume up high. Try cuing with somebody sitting 4 feet away from you. They should not be able to hear you.

Beginners is known as ‘Places‘, Lighting cues tend to be called as ‘Light Cue‘ rather than ‘LX cue’ in the USA. And Standby cues are often called ‘Warn‘.

The SM Desk (or Prompt Desk) is the centre of stage management communications during the performance. Usually situated downstage left (in the prompt corner), a typical modern SM desk contains the following features: 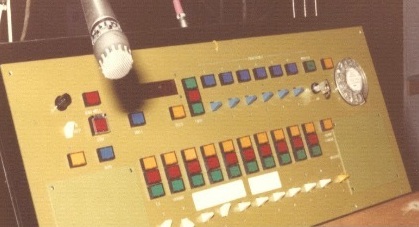 Cue lights are a visual signal to technical operators and actors that their cue is imminent (flashing red) or has come (green).

The lights are operated by the DSM at the prompt desk.

There are usually two rows of switches. The top row operates the red ‘Standby’ or ‘Warn’ light. When first pressed, the light on the SM desk and at the operating position or entrance flash red.

The operator or actor has an acknowledge switch, which confirms that they are indeed ‘standing by’. This makes the light go steady on the desk and at the operating position.

At the cue point, the DSM switches the green light on at the desk. The light comes on at the operating position, and the operator (or actor) carries out the required action.

In most theatres, cue lights are used in conjunction with headsets, so that technical operators get a verbal and visual indication of a cue.

The earliest cue light controls used switches such as those used on pipe organ consoles for selecting voices.
Later, so-called GPO Switches which were used in telephone switching systems, came into use on SM desks, due to their unique tactile qualities, enabling them to be operated without having to look at them.

Recent years have seen the addition of presetting for cue lights. Using similar technology to lighting desks and computer-controlled sound systems, this allows complex sequence of cue lights to be operated reliably and repeatedly, at the press of a single button.
A typical system is Softcue made by Howard Eaton Lighting Ltd.