Below are two articles about Colour Music and it’s influence (if any) on the evolution of Strand’s Light Console.

From LIGHTS! (January 1991)
COLOUR MUSIC WAS ONE OF THE WONDERS OF THE WORLD BEFORE THE FIRST WORLD WAR. DAVID LAZELLRECALLS THE IDEAS OF PROFESSOR ALEXANDER WALLACE RIMINGTON AND SUGGESTS THE REVIVAL OF INTEREST MAY BE LONG OVERDUE… 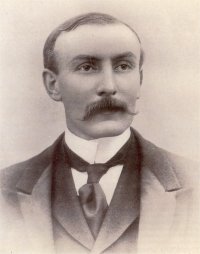 COLOUR
MUSIC
LIGHT
(and a hint of British eccentricity)

If ever the stage lighting business needs a patron saint, it need look no further than to Professor Alexander Wallace Rimington. He was an advocate of Colour Music and a sort of roving ambassador for lighting effects in that halcyon period prior to the First World War.

Strangely enough, there was an awakening public interest in stage effects then, even though mains electricity, like the telephone, was still rumoured to be dangerous. But Professor Rimington determined to show the possibilities, not least by his domestic conversions to the Colour Organ apparatus which he designed and largely made.

Sarah Tooley, a magazine journalist of the time, wrote that the Colour Organ would “flood the most prosaically dull room in London’s murky atmosphere with vibrating rainbow hues which will bring music to the soul of those cultivated to receive these impressions”.

Professor Rimington’s life was almost contemporary with the great days of the Crystal Palace, that ad hoc auditorium in south-east London. Here, too, the early stage lighting effects had been subject to experiment by popular lecturers like the Rev. John Wood.

Wallace Rimington was born in 1854. As a young man, he had studied art, later exhibiting at the Royal Academy and the Royal Society of British Artists.

Inevitably, given the discoveries of the time, he became interested in photography and music, bringing to both a growing vision for lighting effects. His Colour Music idea probably grew from discussions found in late Victorian magazines, namely that colour and sound were two aspects of the same reality, i.e. the music of rhythm of the universe.

This is probably “old hat” by now, but at the time, it seemed a novel enough idea for Professor Rimington to explore further. He believed that sound (music) and colour were both due to vibrations that stimulated the optic and aural nerve endings. So if one could perform music whilst creating lighting effects that, metaphorically speaking, were on the same wavelength, it would be possible to capture more realistically the composer’s intentions.

Stage drama might be enhanced, too, and in this sense there was perhaps some influence from Bayreuth, for Richard Wagner was certainly interested in colour, as Professor Rimington well knew.

Experimenting with electrically driven gadgetry and other marvels, Professor Rimington devoted much of his London residence – in Pembridge Crescent, W11 – to his Colour Music installation. Many celebrities came to see it, one being Sir George Grove.

Basically, the equipment projected varying hues onto a curtain or a screen, the varying effects expressing the “idea behind the music”, so that those present would receive audio and visual interpretation of the composer’s ideas.

Writing about this art form, in the first decade of the century, in his book “Colour Music: The Art of Mobile Colour”, Rimington offered general guidance on the way that standard works in the repertoire might be expressed in colour. Of course, he hoped that composers would in the future write their scores in dual form, for conventional sound expression, and for visual or light effects.

A Wagnerian trumpet blast, he suggested, might be accompanied by intense orange effects, “which palpitates with the harmonic colours corresponding to a subordinate passage on some of the other orchestral instruments. The blast ceases; there is a faint echo of it upon the violins, while the screen pulsates with pale lemon and saffron hardly discernable. Again comes the blast of trumpets, and once more the screen flames with orange modulations”. 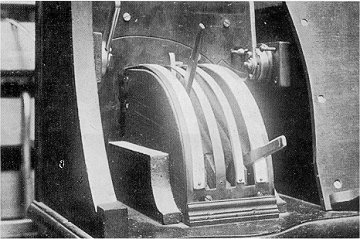 Lighting controls for the three-colour organ

Professor Rimington’s home demonstrations must have been unforgettable. The Colour Organ was some ten feet high, with a five octave keyboard which was similar to that of a church organ, being controlled by stops. A line of “colour keys” was situated above the conventional (sound) keyboard, and connected to a lens-and-filters system, so that “colour” was “played”. Best effects were secured when the sound and colour were played from separate keyboards.

The person “playing the colours” was able to monitor the effects, by looking through a strategically placed mirror, but inevitably a good performance demanded a great deal of rehearsal not to mention luck, remembering the limited potential of mains electricity.

A “swell” pedal could heighten or diminish the colour effects, whilst keyboard stops provided the elements of control for brightness, into and out of the other colours, dissolve effects and so on.

There seems little doubt that Professor Rimington’s keyboard concepts were forerunners of the Strand keyboard controls for theatrical lighting, coming years later. A power supply of 150 amps was required to power the lighting source, arc lamps mainly, and the colour dyes used on the filters were developed after considerable research. 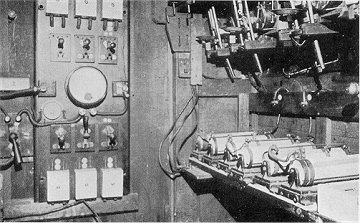 The 1300-candlepower light source for the organ

Contemporary photography, circa 1912, of the in-house electric fittings gives the impression that the wiring was intended to supply a local airfield or factory. Readers were assured that the Colour Organ consumed thirteen hundred candle power, though candles were not used, nor were nightlights for the quieter passages!

Theatre specialists were interested in these ideas, but Professor Rimington tended to lecture on social realities when he appeared on platforms. He believed that Britons had lost “that fine sense of colour they possessed in medieval times”, and thought that the daily round of most people was so inartistic in nature as to prohibit any real appreciation of colour. Colour Music could act as a bridge between the everyday and a sense of enhanced awareness of the world, whilst psychological medicine might similarly make use of the insights derived.

He was by all accounts an earnest and interesting lecturer, but must have been aware that composers might have their own idea of colour interpretation of their work, not to mention the stated preferences of orchestral conductors.

In his sixtieth year when war began in August 1914, Professor Rimington had been anticipating a public demonstration of Colour Music, which, better than anything he wrote, might persuade the public of his case. Alas, the event was abandoned.

By the time Professor Rimington died in 1918, there was a new interest in presentation of musical performance, aided lighting and other somewhat neglected aids.

Had he lived into the 1920’s, it seems likely that a School of Colour Music would have been established in London.

In the January 1991 issue of LIGHTS!, we learned from David Lazell of the early experiments in music and light carried out by Professor Rimington. Here, the doyen of the lighting world, FRED BENTHAM, puts the record straight.

NO PROBABLE POSSIBLE SHADOW OF A DOUBT 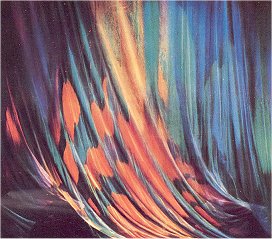 “There seems little doubt that Professor Rimington’s keyboard concepts were the forerunners of the Strand keyboard controls for theatrical lighting coming years later.”
Coming across this in Lights! Vol.2 Issue 1, in January 1991 I felt I should respond.

There is grave doubt – but no need to speculate. As the man who joined Strand Electric in June 1932 with the idea firmly in his head and a photo of a Light Console scale model in his pocket, I know what had influenced me. It was the cinema organ console with its rows of stop keys.

Select and play from keyboard masters plus pistons as presets. Hence the John Compton console and relay to control a Mansell-clutch dimmer bank. I shall not go into detail as there have been many descriptions since it was launched in June 1935 in our Floral Street demonstration theatre. Items played then included: Wagner’s Flying Dutchman overture, Twelfth Street Rag and Tchaikovsky’s 4th Symphony (1st movement). 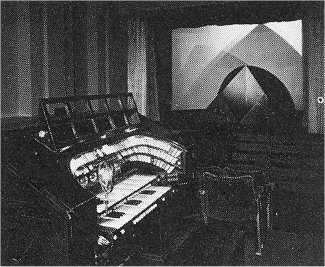 Officially it was to facilitate the control of stage lighting by a single operator seated with a good view of the stage. That was what got the three directors to spend the then unheard of sum of £1000 on it. Unofficially it was to pursue “Light as an Art” – the title of my long article in The Builder of September 2, 1932. Why that journal? The answer is that my own theories covered the whole visual ambience. The architecture of the auditorium was as important as the set on the stage.

Ultimately all this was incorporated in a veritable temple to my colour music in the form of the King Street Strand Electric theatre of 1939. After this was bombed in May 1941, the console and its dimmer bank went into the London Palladium that December for Robert Nesbitt’s new show Gangway, proving itself in its other role of stage-switchboard.

Where does Professor Rimington’s influence as a “patron saint” come in all this? The answer has to be: nowhere at all! That young Fred Bentham was intolerant of the theories of Rimington, Adrian Klein and the rest, when he read Klein’s book: Colour Music: The Art of Light. 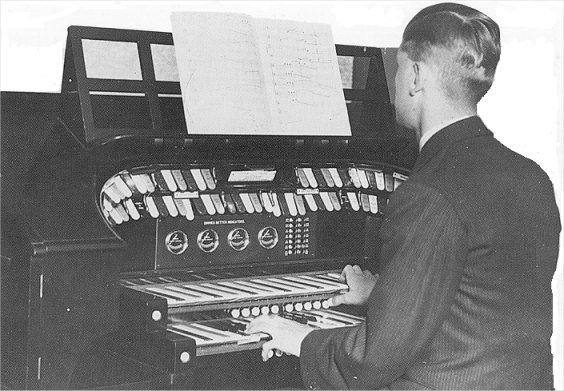 Fred Bentham at the Light Console

Visual equivalents of “music notes” and like theories never had appealed. What some music inspired was a varying picture evoked by its changes of mood using mainly (but not always) dimmers. One was playing lighting variations on a suitable set of drapes, or whatever, as a theme.

In this, the ideas of Appia in the Wagner context were exciting. I suppose my earliest encounter with “mood” lighting as a boy would have been the cue: “Down to blues” for romantic numbers in musicals and variety acts on the stages of theatre or super-cinema. Or long before, when the sun happened to come out and shine through the tall church windows at just the right music cue during Sunday Service!

“Also it led directly to the Strand Light Console” – more nonsense. This time from Klein himself in the 1937 edition of his book. This was a reprint of his original colour music book of ten years earlier with a 13-page “Introduction” added, to bring it up to date.

In the latter, four pages and three full-page plates were devoted to my original light console. In strict fact Klein staged a trial of his colour organ as an interlude at the Finsbury Park in London.

He says “The show was a middling success”. Fiasco would seem to have been a more appropriate description.

The audience at this kind of super-cinema were not likely to be receptive to such high-brow theories anyway. However, the event was used by me to pretend that Strand Electric had a rival experimenter in the field of organ control of lighting. 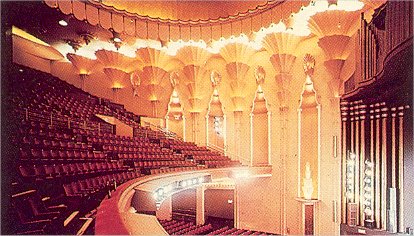 There had been some dithering, particularly on the part of the third director (Mansell – of clutch fame) about spending all that money on my novel notion for control. To quote his own words in a memo to me: “I think it hardly likely the directors will go to this expense. Certainly I would not be prepared to recommend it.” Dated 16th June 1933 and attached to his works quotation, that was that. Except that it wasn’t.

Using press cuttings of the Klein experiment at Finsbury Park and stressing the connection between Major Bell and Strand’s rivals, Major Equipment, I proved we had competition. That it only operated in conjunction with a very special projector was omitted.

A wily trick, perhaps, but it worked. The Light Console order went ahead, thereby proving that a lie can sometimes be a good thing. But it has to be a good one!

No Probable Possible Shadow of a Doubt (Lights - 1992)