Widely regarded as one of the big flops in the musical theatre genre, Metropolis was based on the classic sci-fi film from 1927. 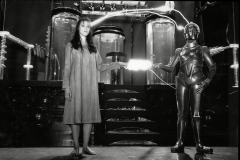