The London and Broadway casts worked phenomenally hard to make the show flow seamlessly. It’s a triumph of ensemble work.

Excerpts from the show – Broadway company 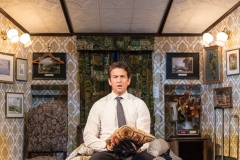 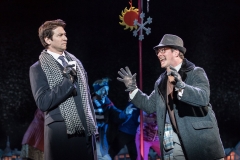 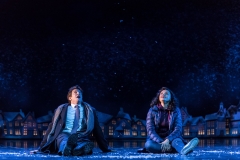 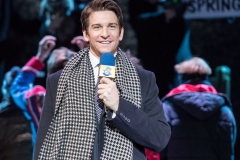 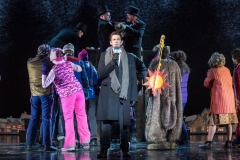 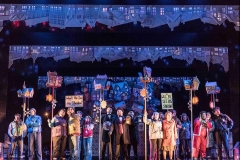 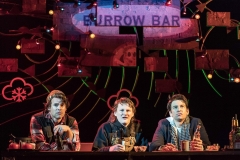 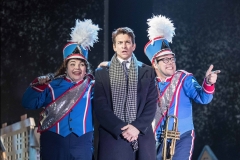 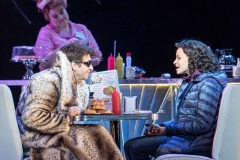 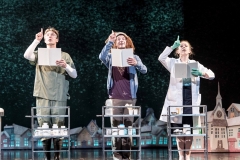 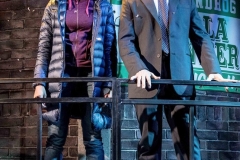 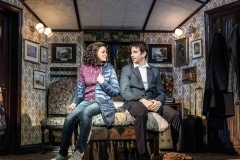 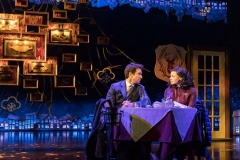 Gloriously simple (yet pretty complex to carry off), the set goes through a considerable number of configurations during the show, facilitated by a revolving stage. But this this no ordinary revolve.
It consists of 5 revolves in one (a Quintuple Revolve).  By using the different revolves in combination (under control of AVW’s Impressario system) an actor or piece of set on one of the smaller revolves can be positioned anywhere within the area defined by the largest revolve, and can be tracked in a straight line across the stage space. A beautiful piece of design work!

Each act of the show opens with around 30 video screens hung at the front of the stage.

The back wall of the set is a huge LED video wall, and is used for firework effects and the sunrise at the end of the show, and on Broadway is used for a new sequence involving a fairground ride.

A car chase scene (following the bar scene) uses fluorescent-painted models under UV light for a particularly effective sequence shown as if from above.

During the first preview on Broadway on 16 March 2017, the revolve stopped working around 15-20 minutes into the show, leading to the cast continuing with an enhanced concert version of the show without most of the glorious set changes. Director Matthew Warchus appeared on stage to explain the way forward after a 20 minute delay while the crew attempted to get things running again.