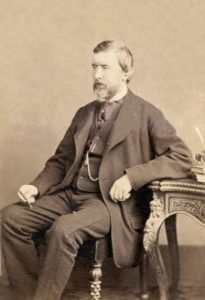 Pepper was a scientist (analytical chemist) who employed theatrical and illusion techniques to popularise science.

1838 – Royal Polytechnic Institution (RPI) opened, as a museum “for the advancement of Practical Science, in connexion with agriculture, arts and manufacture” (The Mirror, August 6, 1838). The building (significantly altered) is now part of the University of Westminster. The address is 309 Regent Street.

1847 – First lectures by John Henry Pepper at the Royal Polytechnic Institution (RPI), covering for a period of absence by John Ryan.

1848 – A new theatre was added to the building, which became world famous for its spectacular magic lantern shows. [ref]
This could be the first permanent purpose-built projection theatre.

1850 March – Pepper appointed to the full-time post of chemistry lecturer at the Institution.

Around 1860 – Thomas W Tobin, builder of magic illusions for John Nevil Maskelyne at the Egyptian Hall in later years, built a ‘Proteus’ cabinet for Pepper’s lectures, which used mirrors and a central pole to conceal a man in a seemingly empty cabinet. (from The Illustrated History of Magic by Milbourne and Maurine Christopher, 1976)

1854 – Pepper became the director of the RPI, and was internationally known as ‘Professor’ Pepper, a showman and popular science lecturer; he helped develop the popular theatrical illusion known as Pepper’s ghost. [ref]

1862 – Pepper first demonstrated his version of the ghost effect which Henry Dirks invented.

1872 – Pepper resigned from the Institution.

1881 – Royal Polytechnic Institution closed and the building was sold to the philanthropist Quintin Hogg, and the RPI succeeded by his Young Men’s Christian Institute (later known at the Regent Street Polytechnic), which opened in 1882 [ref]

Victorian Popularizers of Science: Designing Nature for New Audiences by Bernard Lightman (Chicago : University of Chicago Press, 2007)
“Spectres and Spectators:The Poly-Technologies of the Pepper’s Ghost Illusion” by Beth A. Kattelman in Theatre, Performance and Analogue Technology edited by Kara Reilly (London: Palgrave Macmillan, 2013)
The Temple of Minerva : magic and the magic lantern at the Royal Polytechnic Institution, London 1837-1901 by Jeremy Brooker (London: The Magic Lantern Society, 2013)