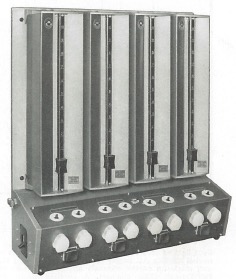 Introduced in 1963 as a more compact version of the 1950 model Junior HA 8 Switchboard.

The Junior 8 has eight channels each of 1kW maximum and four cordless dimmers as an integral part, of a new variable load design.
The single switch to each control channel (silent AC flush type) connects each channel to be "full on", "on dimmer" or "off" so that dimmers need not be wasted, yet all eight channels can be faded in or out simultaneously from the four dimmers.
All eight channels terminated in 5-amp 3-pin B.S. socket outlets complete with plug tops (white for labelling) which allow light circuits to be "patched" in any order and permit circuit substitution at the control, i.e. more than eight circuits can be used from a single Junior 8. Channels can be grouped via, or independent of, the silent master blackout switch which has ample capacity to control three Junior 8 units.
Slave units can be added at any time to make up sixteen or twenty-four channels. Each slave unit is complete with alternative number labels, linking terminals and connector bushes.
Junior 8 controls can be used without modification either as permanent fixtures or as portable boards. They are light in weight and readily transportable without taking apart.