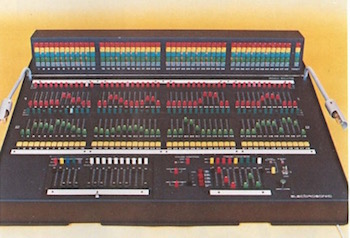 From 'Electrosonic: 50 Years on the Audio-Visual Front Line' page 90:
"Jim Moody (author of 'Concert Lighting') contributed greatly to the specification of what became a famous Electrosonic 'standard product'. This was ROCKBOARD, a console whose name says it all. It was basically a two preset, three groups per preset system with flash buttons on every channel, and a hidden pin matrix for ten more group masters, and for selecting channels to the 'chase' feature.
One optional feature was a massive array of buttons constituting a 'touch matrix'. This allowed up to five groups to be set up very fast simply by touching a channel button. This facility needed an array of 300 buttons in the case of a 60 channel board!"

Rockboard - 60 channel
From The NEET Collection

Catalogue & Journal Entries for Rockboard in the Backstage Heritage Collection

Back to Control - Manual (Electrosonic)