Opened in 1918 as the Selwyn Theatre, named after producers Edgar and Arch Selwyn and built by architect George Keister, the venue operated as a grindhouse (movie theater) once  the depression hit, until it was restored in 2000 by the Roundabout Theatre Company and renamed the American Airlines Theatre.

The adjacent office building was rebuilt during the renovation and houses the 42nd Street Studios, featuring an eye-catching lighting design by Anne Militello, who is interviewed on this site.

More about The American Airlines Theatre at Playbill.com 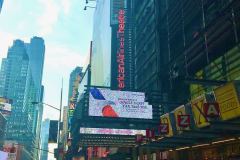