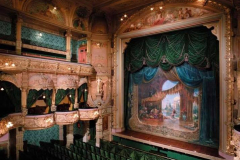 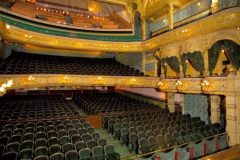 Mentions of Gaiety Theatre, Isle of Man in indexed journals

The Corsican Trap is taken from the play the ‘Corsican Brothers’. As part of the plot, a dead man has to appear as a ghost. To achieve this a specialised trap was devised that would make the actor (or ghost!) appear through the stage, glide across it while also rising at the same time. Our trusting actor would stand on a small platform (located under the stage)at the base of a set of rising rails, or track. The small platform would travel up the track operated manually on a drum & shaft and winch system, while at the same time a specially designed moving floor, called a Scruto, would travel in the same direction and at the same speed, thus allowing the actor to appear through a specifically located hole in the Scruto giving the gradual rising appearance of our dead hero!

There was evidence that a trap may have been temporarily installed at the Gaiety, so efforts were made to re-create and install the unit. As a project the sub-stage restoration has been a slow patient undertaking with each important element being meticulously researched and only constructed and installed when full knowledge was gained. The re-instated Corsican Trap was re-created and constructed by a local master carpenter in 1995, since then it has been added to and was finally commissioned in the Spring of 2000 in preparation for its inclusion in the play the ‘Corsican Brothers’ which was an integral part of the Gaiety’s Centenary celebration during the Summer of 2000.

The trap lived up to expectation and wowed audiences for the duration of the shows run. It remains the only known existing Corsican Trap or Ghost Glide in the British Isles, possibly the world.

Click below to see the effect unfold before your very eyes. This scene is from Act 1 Scene II as the dead brother Louis appears to his twin Fabien, with MARK GOLDTHORP as the twin brothers.