You will need a basic PA system in your drama room, to allow you to connect a laptop or MP3 player and provide a decent level of amplification. All-in-one units are available which can be easily moved around.

The Alesis and Fender systems shown on the right are both suitable for small rooms. The Fender kit has more of a punch, and is portable, but heavier, and needs connecting up before use (the speakers have cables to connect them to the main amplifier unit). The Alesis unit has a rechargable battery built-in, and is on wheels (like a suitcase). It’s suitable for medium volume music, but can’t cope with loud music or heavy bass frequencies.

A laptop or MP3 player can connect to the system using a suitable ‘twin phono to minijack’ cable as shown on the far right.

You can also connect up to 3 microphones into the systems.

As most students have portable MP3 players, consider how they might use their technology to make a recording suitable for an audio walk.

QLab has evolved over the last few years to be the preferred software for cue-based playback of sound (i.e. sounds that are played on a particular cue). It runs on Apple Mac computers, and has a number of invaluable features:

The sounds you hear during a film or TV show may not be as they seem. Many are created after the actors have gone home by Foley Artists. The job of editing and enhancing the first sound films made at Universal Studios in Hollywood went to Jack Foley, a sound technician. He was so good at imitating the footstep patterns of the actors of the day that the process was named after him.
See Clip from The Secret World of Foley for some classroom-friendly examples. 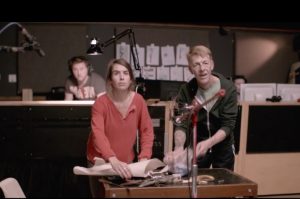 While it applies primarily to film production, the term can also be used for creating sound effects for radio drama, or for multimedia productions like The Encounter by Complicite or some of the work of Katie Mitchell (see video below).

Use a cheap digital recorder (e.g. Zoom H1, shown right) and a set of headphones to record sounds made by everyday objects, then use software to distort them.

What happens if you make a short film and have the wrong sounds accompanying each action? How far from reality can you get and still believe that the action on screen sounds right?

Software such as Apple’s Logic Pro comes complete with a huge range of sound effects. You can also download them from various websites.
COMING SOON – LINKS

Music can have a powerful effect at helping students find the emotion of a particular scene.
Experiment with using a piece of music under a scene, and ask the students to change their performance based on the tempo or volume of the music. A piece such as Nimrod from Elgar’s Enigma Variations or Symphony No. 3 by Saint-Saens has a suitable range. The students could then try repeating the scene using the same emotion, but without the music, or starting the music at a different point in the scene. You’ll have your own ideas about music that would work. Classical music works best, as the beat is not regular, and a piece should be chosen without lyrics.