When using digital projection as part of a drama performance, multimedia installation or other project, it’s important that the presentation is slick and without popup menus and other distractions.

This rules out the use of a lot of multimedia playback software, such as Windows Media Player or VLC.

An extremely useful program is Qlab, available for Mac from www.figure53.com
On a Windows system, ScreenMonkey is a good bet: www.screenmonkey.co.uk

For information on connecting your computer / projector, see the new Multimedia Connections page

Qlab runs on Mac computers, and enables the second display output of the Mac to be connected to a projector. When no video is running, the projector output shows the Mac desktop, which should be set to black (which can be done within Qlab (Tools / Black out desktop backgrounds), or choosing a black desktop background under System Preferences / Desktop & Screen Saver).
The primary display output shows a Cue list and GO button along with information about running cues etc.
Read more about Qlab at http://figure53.com/qlab/

You can use MIDI to control Qlab, by connecting between any MIDI device and the Mac running Qlab. There are also devices specifically for controlling Qlab, which are listed under Sound Links.

Overcoming Power Settings and Optimising the Mac for Qlab

The Caffeine freeware app can be used to bypass any Mac power settings that may put the machine to sleep when you don’t want it.
Figure53 have a great page on how to prepare your Mac for Qlab use.  https://figure53.com/docs/qlab/v3/general/preparing-your-mac/

A wide range of tools for interactive projection are available in the phenomenal Isadora software by TroikaTronix.

A wide range of tutorials are available for the software, on Youtube

Using Powerpoint for Mac or Windows

Powerpoint can be used on Windows computers for simple playback or video images or slides. It can theoretically also be used for audio playback, but is not an ideal solution for this due to lack of playback controls etc.

With care, your projector will give you many years of use. However, there is some maintenance required periodically.

The projector filter must be cleaned regularly. It catches dust and other airborne particles as they are drawn into the projector by the cooling fan. There’s a timer built into most projectors, which flash up a warning that the filter may be blocked and should be replaced. If you see this warning sign, it’s important to act on it as soon as possible, as the warning may show up during a performance or presentation, or worse, the projector could overheat and shut down.

Each projector lamp has a rated life (in hours). Check online for the instructions and specifications for your projector.
Once the lamp hour timer reaches the rated life of the lamp, it may shut down to prevent the projector from being damaged.

Red lights flashing together mean the projector is overheating or there’s a fault.
Check online for the exact error message settings for your projector.

An analogue vision mixer (such as the Panasonic WJ-MX12) can be used to ‘live mix’ between black (which the vision mixer generates) and inputs from a range of analogue sources (including multiple video cameras and DVD players, and (back in the day) VHS players). However, it cannot accept a higher-resolution image from a computer.
A more modern mixer (such as the Roland V4-EX) CAN accept a PC (or Mac) input, as well as a composite video or HDMI signal from a camera. Give yourself time to experiment with the display settings on the computer, as you sometimes need to reduce the resolution. 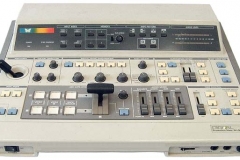 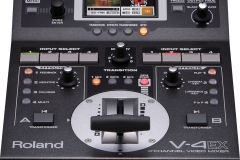 Domestic-quality video cameras can be used to create a live feed from the stage (or an adjacent room) to a digital projector. A reasonable quality of video picture can be obtained by using a standard microphone cable with a pair of XLR to Phono adaptors to connect into the video camera output and the projector input. A cable length of around 20 metres gives a good enough signal. If you have a higher budget, you can use professional equipment with a high quality BNC video output connection, with BNC video cables, over a much longer distance. You’ll still need an adaptor to connect into the video input of the projector.

There are a number of factors to consider when choosing a data projector.

Websites such as www.projectorcentral.com allow you to easily select a projector using these criteria, and also has an incredibly useful throw distance / image size calculator, which shows what each model of projector is capable of.

This is a function available on data projectors which allows the selective stretching of the horizontal component of the projected image so that it appears to be rectangular when projected from an angle above or below the projection surface. More advanced (expensive) projectors can also keystone the vertical component of the image, and some recent projectors can automatically detect the projection surface and can automatically keystone the image to fit.
Qlab (and other projection software) can also provide keystone correction and mapping of an image to a complex object.

Projecting onto the Ceiling or Floor

Projectors should not be tilted more than 30 degrees from the horizontal. You can use a deflector mirror to project the image either up or down from the horizontal projector.
A front-silvered mirror should be used. Ensure that the mirror you buy can be safely and securely mounted to the projector / lens.

Blocking ‘Black’ Light from a projector

The contrast ratio of a projector is a measure of how ‘black’ the dark parts of the projected image can be.This includes the black that Qlab projects when there is no video playing.
Cheaper LCD projectors (with, for example a contrast ratio around 400:1) have a visible dark grey beam which can be intrusive during blackouts.
A projector using DLP technology can produce a much better contrast ratio, of around 2500:1.
A professional high quality projector may have a contrast ratio of 10,000:1, producing very dark blacks, and an almost invisible blank screen.

If you’re only able to use a projector with a poor contrast ratio, you can use a dowser to block the light.
CARDBOARD FLAP: The most low-tech way of achieving this is to use a piece of cardboard attached to a piece of string, taped onto the projector so that when the string is released, the cardboard flaps over the lens, blocking the light.
CD-ROM DRIVE: Old CD-ROM drives from redundant computers can be modified into very effective dowsers. [Advice follows for technically-minded folk]: Open the case of the CD-ROM and remove (and recycle at your nearest facility) the electronics, apart from the motor drive for the CD drawer. Solder cables to the motor, and run to a suitable connector that you’ve mounted on the CD-ROM body. Apply 5V at one polarity and the drawer opens. Reverse the polarity, and it closes. Cover the hole in the CD drawer with blackwrap tape or other suitable heat-resistant material.
DMX DOWSER: A number of companies make DMX-controllable dowsers which fit onto the front of a projector and have a motor and a shutter which lowers to cover the projector lens.
Bakerwood ProDowser
Flapper
Blacky
Wahlberg Projector Shutter

A wide range of ‘pico’ projectors are now available, many with the following features:

While the brightness cannot compare with larger desktop projectors, the possibilities of using a handheld projector (or headworn, or mounted inside a prop, or hidden in a small room as part of an installation) are endless. They are usually nearly silent-running, so are perfect for small venues.

The brightness of these projectors are measured in lumens, so this is the critical information to find out before buying.

Flexible curtain embedded with multiple LED sources which can be mapped to show video images.

Modern TVs can accept an HDMI input, so can show a signal from a laptop or video camera (or vision mixer).