Some thoughts about the evolution of projection as part of live events.

The light sources were initially candles and oil lamps. In the 19th century, kerosene and gas lights were added. Later, limelight was added (hydrogen + oxygen, directed at a piece of lime), along with arc lamps.

Lighting technique pioneered by theatre designer Adolf Linnebach (1876-1963) around 1917. Linnebach was the technical director at the State Schauspielhaus, Dresden, Germany. The technique involves using a lensless and reflector-less lantern and a cut-out shape. The inside of the lantern is painted black to minimise reflection. The point source of the lamp casts a detailed shadow of the shape on a backcloth, and can (still!) be a surprisingly effective method to define a location.

The London production of Young Frankenstein used a similar technique, using a 8 foot (2.4m) wide roller, with tree cutouts, and a single lantern, behind the backdrop, to create an effectively lo-fi moving landscape.

See The Hunting of the Snark 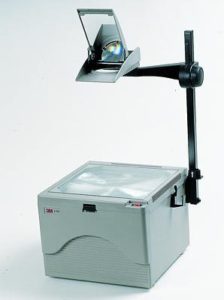