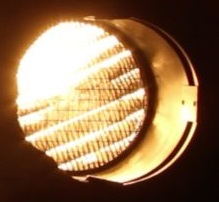 Glow from a 1kW Parcan

In early 2018, it became clear that the forthcoming European legislation “Ecodesign Working Plan 2016-2019” was going to cause major disruption to the  lighting industry across the continent, and would affect every theatre, event space, school, university, entertainment location and cost billions to solve.

The Eco-Design plan was to bring entertainment lighting sources under the same energy-efficiency guidelines as those for domestic installations and other workplaces (e.g. offices). Whilst that sounds laudable, it would affect over 90% of current lighting equipment, and would prevent it being used (by stopping manufacturers making replacement lamps).

From Lighting & Sound International: Under the proposed new legislation, due to come into effect on 1 September 2020, there will be a minimum efficiency of 85 lumens per watt and a maximum standby power of 0.5W on all light sources (lamps or self-contained fixtures) to be sold in the EU. The result would be that most of the light sources used for entertainment lighting – from tungsten to even the newest LED fixtures – would not meet the regulations. 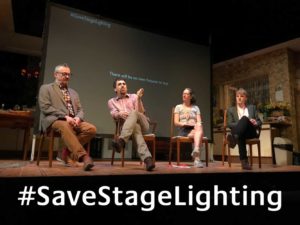 On 11 May 2018, an open forum was held at the National Theatre, with lighting designers Rob Halliday, Paule Constable, Robbie Butler and ETC’s Adam Bennette, to discuss the issue.

Jo Town puts it very well in her UK Theatre post (29 March 2018):
“From September 2020 they propose to allow only light sources that meet a notional efficiency target, with no allowance made for the visual quality of those light sources, or how those light sources are actually used.
The impact on theatrical production across Europe would be immediate, and overwhelming.
Replacing existing lighting fixtures with new EU-approved sources would be incredibly ex- pensive as it would mean buying an entirely new rig of LED lighting units. It would be more costly still because it would likely involve replacing the building’s entire lighting infrastructure – dimmers, cabling, control consoles – as well. For larger venues, this would be both hard to budget for and difficult to implement within the next two years. For smaller venues, it would be ruinous. They would, quite literally, go dark.
More troubling still: there are very few theatrical-quality LED lighting fixtures that come close to matching the beauty, subtlety, richness and poetry of tungsten light sources. Many shows and theatres have started adopting these fixtures but none of these fixtures meet the proposed EU standards; they would no longer be available. The indication from the LED manufacturers is that no new fixtures of this type will be able to meet these new regulations even by 2020.”

The ALD Briefing document is excellent and contains some fascinating information about how much of a lighting rig is actually used during a show.

In an excellent interview on Curtain Call, top lighting designer Paule Constable puts it very clearly:
“All the tools that we use a the moment, both old and new, for lighting theatre, are about to be made obsolete. We’re not going to be able to get light bulbs for older tungsten lights that we’ve used for a long time. We’re going to have to entirely change the infrastructure of the theatres we have – not only in terms of lights, but also dimming, cabling; the whole of the backstage world would need replacing. At present, the alternative low energy sources that we’ve developed with manufacturers that satisfy the needs of contemporary production, use more energy than the top level that the EU is proposing. So even those would be rendered obsolete.
At first we thought we were going to lose just the older tungsten sources, that we’re already starting to phase out where money allows, but even the new greener technologies we use are not being recognised as valid by the EU. As an example, on the international production of Les Miserables that I designed for Cameron Mackintosh (everywhere except London), only 9 of the 300 lights on that show would still be allowed to be used. This is despite around 50% of that rig being LED, dropping the energy usage that rig has by 50% over the years. Patrick Woodroffe, lighting designer for the Rolling Stones, has reduced energy usage on the tours by 70%.”
Listen to the full interview for more detail, on Curtain Call

“# Save Stage Lighting” gobos can be bought from GoboPlus