An L.E.D. is an electronic component (full name Light Emitting Diode) which produces light when electric current passes through it in one direction.
In recent years, the efficiency of LEDs has risen and the cost has dropped, meaning that it’s possible to use LED lighting in an entire rig without losing significant brightness.

What kind of fixtures are available with LEDs?

There are a wide range of types of LED fixture now available, which are beginning to mirror the qualities of incandescent stage lights.

LED floods are usually single colour, but available with colour mixing, in various different sizes for applications as varied as outdoor security lighting through to specialised lighting for stage cycloramas. 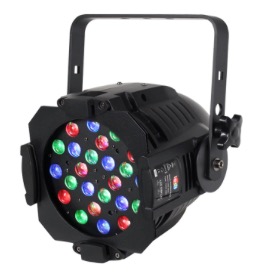 These are the most common, as they produce a wash of light similar to that from a Parcan or a Fresnel.
Usually RGB, but sometimes RGBW or RGBAW (red, green, blue, amber, white) for the best range of colours.
The beam size (like a Parcan) is not adjustable on most, although there are zoom versions available.

Only widely available in the last few years, companies such as ETC are leading the way in LED technology which beats the equivalent incandescent fitting, but with full, subtle, theatre-appropriate colour mixing. Although the products are expensive, again, the prices are dropping, and becoming more affordable. Most specialist suppliers will be able to demonstrate the products before you buy – it’s important to see what you’re getting, as the quality varies considerably if you choose cheaper products.

Why do LEDs have electronics circuits controlling them?

LED light sources require driver circuitry to provide the stable voltage and current they need to operate. The electronics also receive the DMX signal from the lighting control desk, and also helps with smooth colour mixing and reduction of flicker (so that LED light sources look good on video as well as in person).
For this reason, most LED fixtures cannot be connected to a standard lighting dimmer. They require a constant power feed.
Having said that, some recent fixtures CAN be dimmed using a standard (relatively modern) stage lighting dimmer – these are not colour-mixing LEDs however, and provide a way to convert an entire lighting rig to LED white light sources with no change in the cabling or other infrastructure.

How do you use LEDs in a stage lighting rig?

If you want all of the LEDs in the rig to respond in the same colour at the same time, you can set them all to the same start address (e.g. channel 25).

The lighting desk channels can then be mixed to produce the required colours.
Modern computerised lighting desks make life easier by enabling you to control all of the colours by only selecting the LED fixture once.

On modern desks, LEDs are treated the same as any other fixtures. This term includes moving lights, LEDs and any other equipment which can be controlled using DMX512 control signal from the lighting desk. Instead of worrying about which channel on the desk to use for red, which for green etc, a modern desk allocates a channel number to the LED instrument, and uses the DMX channels in the background, without you having to worry about them. The same DMX channels are used up, but the soft patch inside the control desk takes care of them.

When you select each LED fixture (or group of LED fixtures), the desk software allows you to select the required colour from a palette, or from a list approximating the gel ranges of companies such as Rosco or Lee Filters.

Using the same example as above, the control desk becomes easier to use, and the work is done by the software.

It can be seen that the control channel that you use on the desk may or may not also be the DMX channel that the fixture or equipment is addressed to.

Why use LEDs? They cost a lot more than regular instruments.

LEDs are far more energy efficient. An LED flood may use only 30 Watts of power, but produce the same amount of light as a 300 Watt traditional floodlight. As the industry becomes more aware of the need to use sustainable practices, LEDs are becoming essential.
LEDs enable an (almost) infinite variety of colours to be produced on stage without having to rig lots of traditional filament lanterns with gel in front of them. This is a vast saving in time and effort. The colours can be adjusted without climbing a ladder.

What is the difference between the cheap ones and the really expensive ones?

Why does everyone not use them all the time?

At the moment there are no direct replacements for specialist theatre lamps to convert existing lanterns to LED.

The first stage profile lantern with an LED light source was the Robert Juliat Aledin 630 in 2010.

Keywords: Led lights, Lighting with LEDS, Using LEDS for Lighting, led lights have electrical boards on back them