Direction of light is all important

The type of lighting equipment you have at your disposal is far less important than where the light actually is coming from. Your choice of which lighting angles you’d like to use for your production will help you to decide where you need the light to come from. The rest of this page contains information about the rigging alternatives that you may have at your disposal in your venue.

Overhead horizontal lighting bars are the most common lighting position in any type of theatre.

Most theatre spaces have scaffold bars (48mm diameter) to rig lanterns from.

If the bars are equipped with sockets, they are internally-wired bars (often abbreviated to IWBs) which use the bar to carry the wiring to the sockets.

On a lighting plan, the lanterns are shown with the bar drawn ‘underneath’ them as shown right.

Lanterns are rigged onto bars using clamps – either a Hook Clamp or a Half Clamp can be used. (C Clamps are used in the USA). In combination with an M10 bolt and wing nut, any lantern can be rigged easily. A safety wire is also needed to hold the lantern in the air if the primary support (clamp) should fail. 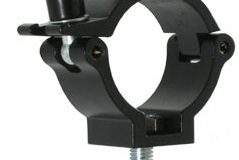 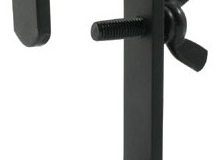 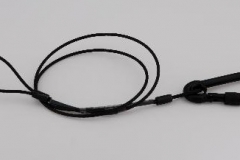 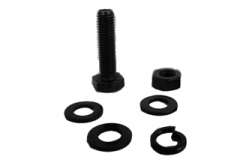 Vertical Extension Tubes (made by City Theatrical) can be used to rig a fixture at a certain height below a bar. They’re not adjustable and are available at 6 inch, 12 inch or 24 inch lengths.
See Ladders below as another way of doing this. 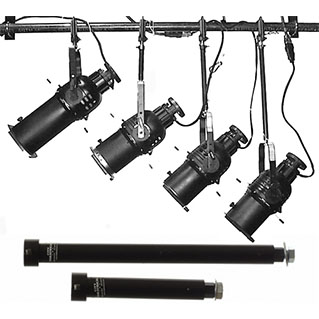 A boom is a vertical scaffold pole, which has fixed to it horizontal boom arms, onto which lanterns can be mounted, to create side light or cross light across the stage.

Depending on height and weight of the lanterns, the top of a boom may need to be hung from a rope attached to the grid at the top of the fly tower, and mounted in a base which is screwed to the stage floor. A shorter boom with less weight on it may just be weighted at the base. A boom base consists of a flat metal plate with a short socket mounted on it into which the vertical boom is fitted. A bolt through the socket and boom ensures the safety of the boom. Weights are placed on the metal plate of the boom base to hold it in place.
A ‘tank trap‘ is the best boom base to use as it’s a heavy metal plate with a suitably long socket to keep the boom upright (see photo below). 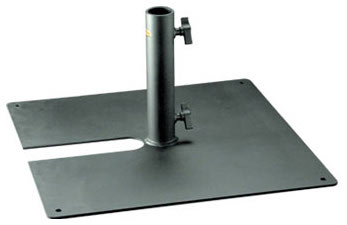 Great care should be taken when using booms in crowded wings, or where there are lots of children on stage, as the lanterns may be at a dangerous height, and the weights are a trip hazard.

Booms are an integral part of dance lighting, and there are traditionally three heights at which lanterns are placed, which correspond to the dancers’ bodies on stage.

Profiles are used for dance side lighting as a greater degree of control is possible over the beam quality and sharpness of the edge of the light.

A flown vertical structure at the side of the stage, used for cross lighting, but with the added advantage of being able to be flown out to allow scenery to leave the stage.
A ladder can also be rigged onto a bar, using a system comprised of a number of H-shaped frames.

Doughty Engineering make a range of modular rigging equipment which can be used in a variety of ways: 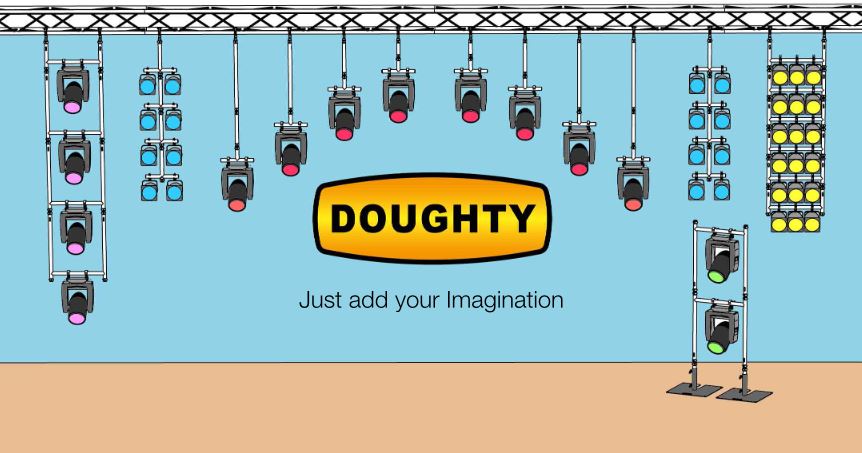 Telescopic stands are used to lift a single lantern to a suitable height.

Multiple lanterns can be used on a stand with a T-Bar. Care should be taken to ensure that the weight capacity of the telescopic stand is not exceeded.

If the stand is very high, weights should be used to lower the centre of gravity to stop the stand falling over if knocked.

Extreme care should be taken if young performers are likely to be around tall stands.

Doughty Engineering make a good range of stands (see photo below). Adaptors can be used at the top of the stand to connect either an individual lantern or a scaffold T bar). 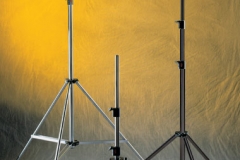 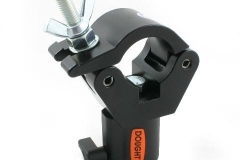 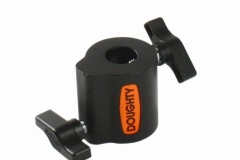 A low ‘bench’ stand can be used to safely anchor a lantern at floor level. These can be easily made using a piece of plywood and a ceiling saddle clamp (see photos below). Doughty Engineering have recently released a floor stand (known as a Par Can Floor Plate) in which the hook clamp can remain in place, saving a lot of rigging time. They also make a wide range of other floor mount options.

Small lanterns such as birdies or small fresnels may be screwed to the set.

Suspending lights from above

This should only be done by a qualified and suitably experienced person. Never attempt to hang lights from any support point that is not specifically designed and installed for that purpose.

The suspended ceiling system is only designed to support the weight of the ceiling tiles, so never hang any other equipment from a ceiling tile system.

The safest way is to use lighting support stands which sit on the floor. Examples are telescopic lighting stands or lighting booms using boom bases (also known as Tank Traps)

This page was written by Jon Primrose, and was first published in February 2016. The latest additions were made in May 2021.