Lighting with a Gauze / Scrim

What is a Gauze / Scrim

A Gauze (UK) or Scrim (USA) is a coarsely woven cloth which can appear transparent or solid depending on how it’s lit.
The words ‘Scrim’ and ‘Gauze’ are used interchangeably.

How to Light A Gauze

To make the gauze appear solid, you should light across the fabric, but not cover any objects behind the gauze with light.
Conversely, to make the gauze appear transparent, no light should fall on it.
A transformation scene, where an entire set is hidden by a gauze, may need a black tab / curtain just upstage of the gauze so that when the set / actors are being positioned, the audience doesn’t detect the movement. Once everything is set, the black curtain can be flown out, and then the lighting cue to ‘bleed through’ the gauze to reveal the upstage set / actors can run.

Projection onto a gauze from behind or in front of it works well. Remember that the image will appear on the floor / set on the other size of the gauze from the projection, so make sure the projector is positioned so that’s not a problem.

HoloGauze is a specialised product which is perfect for front-projected ‘holographic’ projection effects. It’s available from Gerriets.

Shadows on scrim
A shadow on scrim from behind can look great. The following image is from a youth production of The Wizard of Oz a the Northcott Theatre in Exeter, UK. Lighting design by Jon Primrose.
The scrim used is a Sharkstooth Gauze. The witch actor is casting her shadow on the scrim from a floor light behind her, but the image of the actor is also visible through the scrim. The red poppies are projected onto the front of the gauze using a pair of profile lanterns using gobos. 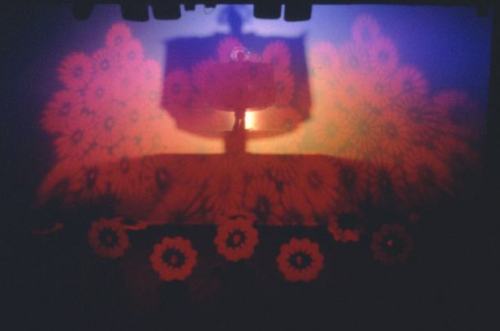 The Wizard of Oz witch silhouette

Shadows on cloth
A solid cloth will produce a definite shadow, but there won’t be a silhouette effect – the photo below shows a group of dancers behind a white calico curtain with a single floor light casting their shadow on the cloth. 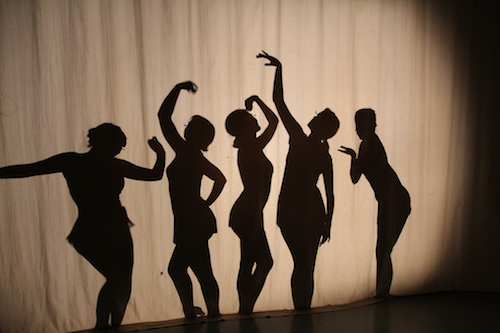 Dancers behind a cloth, backlit from the floor by a pebble-convex lantern. University of Exeter Drama Department 2014.

Silhouette with no cloth
The photo below shows an actor backlit by a single lantern with covering of haze / smoke to make the air appear thicker and to enhance the silhouette effect. 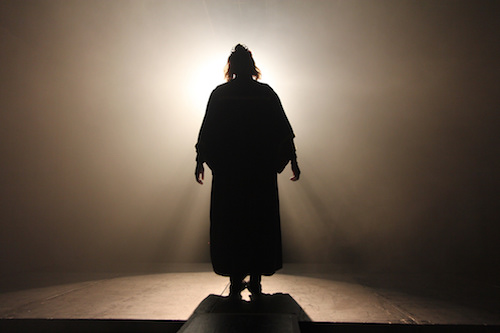 Instrument at head height backlighting actor creating a silhouette effect with haze in the air. University of Exeter Drama Department 2014.