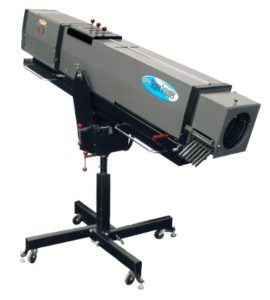 A followspot is a special type of profile lantern which has been adapted to be moved around to follow a performer on stage by an operator. Although the practical operation of the lantern is simple, doing it well requires a great deal of practice.

While it’s true that many pop/rock shows may have used the truck driver as the followspot operator in the past, putting the least experienced member of the crew onto followspot duty may be a mistake.

Abba’s song ‘Super Trouper’ is named after a followspot? Here are the lyrics (and video) if you don’t believe me!

Followspots at the National Theatre

A Matter of Balance

Your followspot should be properly balanced – this will make it much easier to operate. If it’s not balanced, seek advice about how to make it so.

If you find yourself in the position of being a followspot operator and you’ve not done it much before, try to find someone to help you practice before the show starts.

Have two friends on stage (gently!) kicking a tennis ball around while you try to follow it. Although it’s unlikely you’ll ever succeed, you’ll learn how much pressure you need to apply to the followspot to move gracefully around the stage. Try to avoid juddery movements, and make each movement as if you meant to make it!

As time goes on, practice picking up the ball while it’s in motion. See below for information about using sights to do this.

If your followspot has sights already, ensure they’re lined up correctly. Practice picking up small parts of the set around the stage. It should be possible for you to be 100% accurate about these pick-ups, without having to turn the followspot on to check!

If you don’t have sights, make some. Use copper wire (or a wire coat-hanger) to fashion two small loops which you can attach to the top of the followspot. Use blackwrap tape to fix them if you have it, as this won’t melt when the lantern heats up.

There are some manufacturers who make sights with added functions.

Followspotting is hot work – make sure you’re equipped for this. If you’re working in an air-conditioned room, think yourself lucky that the designers of your theatre space allowed for this. If you’re not, wear thin layers of clothing, and use a pair of biker gloves to protect your hands from the heat of the lantern. Stay hydrated, and make sure you take regular breaks.

If you’re having to work on a followspot with sticky shutters or iris, you can use graphite powder to lubricate the parts. Never use oil on a lantern of this kind.

Most followspots will have a local dimmer, separate from the main stage lighting system, which allows the operator full control over the beam.

Plot sheets should include the following information for each cue:

The plot sheet (above) will contain a reference to the size of the beam that’s needed for each cue.
Some common sizes are:

Here’s a wonderful example of a real audio recording of Pink Floyd lighting designer Arthur Max cueing followspots back in 1973:

There are a number of solutions to make followspotting easier.

The ground-control followspot system by PRG enables operators to be situated at floor level and remotely operate their followspot from a safe position backstage, using virtual-reality technology. The light source is a PRG Bad Boy or PRG Best Boy.
The Stage article ‘GroundControl from PRG XL Video – a followspot revolution‘ (15 Dec 2016)

Automated systems (such as RoboSpot from Robe, Zactrack and Blacktrax from Cast Lighting) removes the operator from the equation, and enables a moving light-based followspot to automatically follow a given performer.

Most large modern followspots use an intense type of lamp known as a discharge lamp. This type of light source cannot be dimmed, so mechanical dimming shutters are provided as part of the lantern. (Smaller followspots use traditional tungsten halogen lamps, so have an external dimmer pack).