The stage musical version of this 1994 classic Disney animated feature opened on July 8 1997 in Minneapolis, to rave reviews.
The Broadway version opened officially on November 13 1997 (previews ran from October 15 1997) at the New Amsterdam Theatre. It closed here on June 4 2006, and immediately transferred to the Minskoff Theatre, where it opened on 13 June 2006 and continues to this day.
The London version started previews in the Lyceum Theatre on 24th September 1999, and opened officially on 19 October 1999. Performances were paused in March 2020 due to the coronavirus pandemic, and will resume 29 July 2021. .

Julie Taymor: How We Made The Lion King (October 2019)
[External Website] 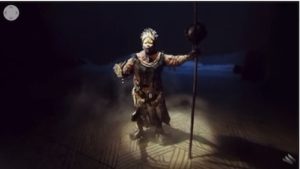 The Circle of Life 360 – Smartphone or Tablet?

If you’re reading this page on a smartphone or on a tablet, you may be able to experience
The Lion King 360 Experience – The Circle of Life
Start the video playing then move your device to look around the stage

The opening of the show is an unforgettable blend of scenic automation, puppetry, choreography, lighting design and simple theatrical devices. 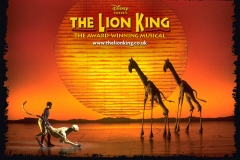 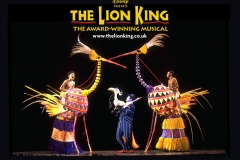 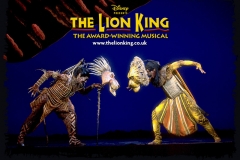 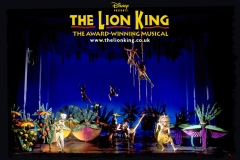 Taking pride of place is the amazing Pride Rock scenic piece which rotates as it rises up through the stage floor, through electric and hydraulic motors, all computer-controlled. To frame it, the rear of the stage rakes up to form a horizon line on the cyclorama.

On tour, Pride Rock doesn’t rise through the floor, but is a ‘train’ of automated pieces which track onstage. The rhythm of the show is still the same; it’s just not practically possible to achieve the full effect on tour.

The video below features a short interview with lighting designer Donald Holder. His original 1997 paperwork is now on the Lighting Archive.

Behind the Scenes at Lion King London