Rob Halliday: “Chess went on to a new production in New York with a substantially different set design – moving periaktoid ‘triangle’ towers that could re-form into different shapes on the stage. This was pre-automated scenery being able to deliver something like this. The towers would have ‘drivers’ inside, and the solution everyone came up with was to drill holes in the stage and mount tiny coloured ‘runway lights’ underneath that could be turned on for the tower drivers to follow. The director persuaded all involved that the routes he decided in the rehearsal room would be the final version that they could drill into the stage…. SURPRISE: during technical rehearsals the routes never stopped changing, until the danger became that the stage would become more hole than stage….” 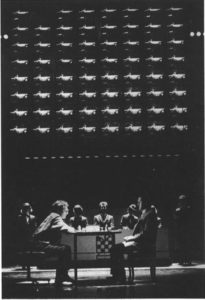 The Chess Vidiwall – the largest of its type ever constructed in the UK (from LSI, July 1986)

Lighting & Sound International from July 1986 had the following:
Screening Chess
A series of three Philips Vidiwalls provides a giant multi-screen display for the musical ‘Chess’, now playing at the Prince Edward Theatre in London. One of the main features of the show is a large 64-screen version (pictured right) depicting a chessboard, which flies in on steel cables during the performance. It weighs 3.8 tonnes, and the screen shows the moves of chess pieces from famous matches as part of the story and all the TV monitors can combine their images to show one enormous picture of the actors on stage and videos providing background to the events prepared on stage.
On either side of the stage there are two 32 screen versions of the wall, which show additional close-ups and videos. Supplied and installed by Philips distributors Mediatech, the 64-screen centre-piece is the largest of its type ever constructed in the UK.
The full 128 screens are supplied with picture information from a bank of six Philips LaserVision players, two video tape recorders, and six TV cameras at stationary positions around the stage. The information from any of these sources is fed through a Philips Matrix Switcher to any of 16 digital image converters, and controlled by a computer designed by Mediatech, and then transferred to any of the TV screens which are arranged in 4 x 2 monitor blocks. The whole event is semi-automatically synched to the directions of the musical conductor, with cue pushes to on-stage action and music scores.

(December 2018) Tony Brown recalled that “the stage was a revolving chess board with half of the squares lit from below each with 6 x white 4′ fluorescent tubes and the other half with six red and six white tubes. Each square has one (or two) Strand Environ fluorescent dimmers. The initial design was that the chess board would rotate one turn clockwise and then reverse, so the power feed to the dimmers was a flexible umbilical (cable) three phase supply. All worked until the Producer decided that, for the finale, the board should revolve continuously! This involved the supply to the dimmers being changed to a commutator / brushes arrangement (which was able to rotate continuously). The effect on the dimmers of a high impedance arcing supply was horrific. I recall many hours crawling through a ‘meccano kit’ of mechanics trying to tweak the dimmers’ immunity to poor supply.”

John Wright recalled “I had been asked to investigate how we could provide dimming for the lighting the 64 chess board squares, each just over a mtr square which had been built on to a revolving and tilting stage. I proposed using custom made cold cathode tubes (which are far easier to dim then conventional fluorescent tubes) but this was rejected once costs became known.
Conventional fluorescent tubes were the only other viable option (the production manager had already conceded to use gells to colour the squares rather then the more desirable option of a mix of cold cathode tubes. A big snag discovered when mocking up a single square was having 2’ (600mm) tubes overlap produced unacceptable hot spots.
Ideally a tube length of around 1mtr was desired, I then recalled observing the tubes lighting London’s underground trains were of an odd ball size.
It turned out one could obtain 1mtr length flu tubes to special order can’t recall the MOQ but was not a problem for this project.
It was agreed that the chess board dimensions would be adapted to suit these tubes. The Strand Environ dimmer was the obvious dimming choice, used in conjunction with custom dimming ballasts (supplied by Control Components). For serviceability reasons the modular version of the Environ dimmer was first proposed but considered not to be sufficiently rugged for use on a gryating structure.
As stated by Tony originally the stage was not going to continually rotate permitting the use of cable connections. When, at 11th hour, it was requested the stage could continually rotate the use of slip rings obviously became necessary. With myself very aware of neutral current summing with dimming systems I suggested using 2 3phase slip ring assemblies with the 2nd pareralled for the neutral. Initially this was not taken up but after burning was subsequently observed on the neutral ring this was done. So far as control connections were concerned thought was given to using D54 (in use by Strand since the first MMS systems). Concerns that slip ring glitches would cause channel slip a 96way telephony slip ring (which I recall was not cheap) was employed. Despite misgivings by some there were never, so far as I was aware any problems with this part of the system. Installation & commissioning of the system took place over 4 night shifts each with a crew of 4 – 5 people.”