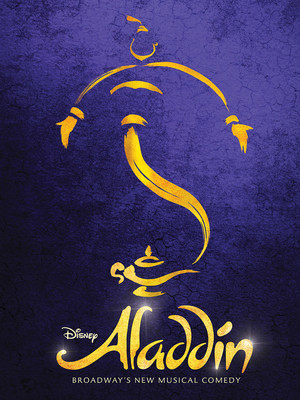 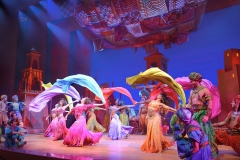 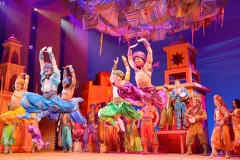 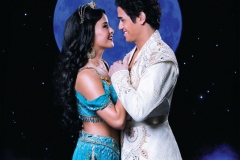 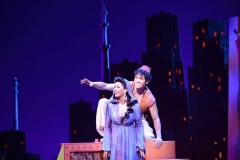 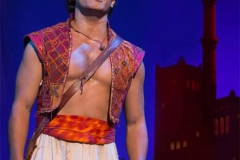 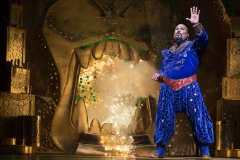 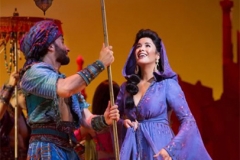 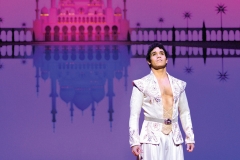 Aladdin – Behind the Scenes (Broadway) 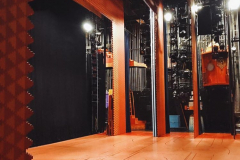 Illusion Designed by Jim Steinmeyer
Engineering and Implementation by Tait
Disney magic prevents anyone associated with the show from revealing anything about the astounding flying carpet effect. And this is largely because its’ secret is completely hidden – there’s no visible means of support.
Before seeing the show, I assumed it was a hydraulic arm at first, as is the case with many magical flying effects (Charlie and the Chocolate Factory‘s ‘great glass elevator’ started out this way but was cut for something simpler for the rest of the run in London, and Chitty Chitty Bang Bang was a triumph of what can be done with careful programming and excellent lighting).
However, in a wonderful moment of bravado, the carpet crosses the stage right in front of a giant moon on the backdrop, which would have revealed any such method.
Unless it’s actually magic, suspension from above is the only option. Some online sources revealed it as drone technology, as this is one of the specialities of Tait, the company that has been revealed as the external vendor that created the carpet. However, drone technology has not yet reached the point where it’s silent, absolutely safe for two actors to be sitting on it, and 100% repeatable, regardless of actor movements or other air movements. Although in ‘A Whole New World‘ it’s impossible to see any detail on the carpet due to the excellent lighting, in the brighter finale sequence, those sitting in the upper seating areas can see what appear to be four fans, one in each corner of the carpet. These are not drone blades, but have thin non-reflective wires attached. The spinning action prevents the wires from being visible to the audience, and makes the illusion a huge success. A larger mechanism, out of view in the flies above the stage, has the same spinners working in synchronisation, along with a system of winches and tracks to enable the necessary range of motion. The entire area above the stage where the carpet flies has to be clear of lighting instruments and set pieces, making it a mammoth co-ordination task between all designers to ensure that the show can still be lit, and that the required set pieces can still fill the stage, without getting in the way of the carpet system. Illusion Designer Jim Steinmeyer, in his blog about his work on the show, only reveals that it uses a classic method from the early 20th Century. The use of an array of thin wires is a tried and tested method for creating flying or levitation illusions. The system has been patented by Tait and can be viewed at Google Patents. 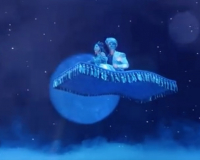 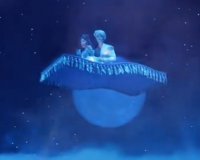 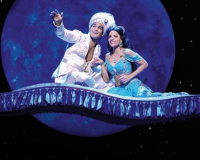 Behind the Scenes – London – Wardrobe Department

There are 108 automated pieces in total, including traps, revolving traps, floor tracks, flown scenery, as well as the flying carpet (see below).  There are also impressive radio-controlled trucks that move around the stage wirelessly. ‘Quick Lifts’ that move at a rate of 12 feet per second propel the actors up onto stage dynamically.
More information: The Hidden Tech Behind Broadway’s Aladdin

The Head of Sound is the number one operator, who mixes most of the shows. The sound designer Ken Travis and his team have developed a system that splits the stage into 14 zones, and through a complex computer interface can track the movement of cast members, and alter the speakers which feed their radio microphone sound to each part of the audience.
More information: The Hidden Tech Behind Broadway’s Aladdin

The Making of Aladdin