Pepper’s Ghost is an optical trick used to make a ghost appear on stage next to an actor. A sheet of glass is hung across the front of the stage so that the image of an actor standing in the orchestra pit appears to float on stage. First shown at the Royal Polytechnic Institution in London by ‘Professor’ John Henry Pepper on Christmas Eve, 1862. Following many subsequent events, Charles Dickens used it during readings of The Haunted Man. Several plays were written specially to use the effect around 1863, but the long-term future of the effect was limited by the fact that the ghost couldn’t speak.
Pepper’s Ghost is now used to great effect in applications like the Haunted Mansion in Disney theme parks.

A modern equivalent is the ‘holographic’ illusion created using the Eyeliner system by Musion (below).
A semi-reflective foil is used instead of a sheet of glass, but it must be carefully positioned, and tightly stretched, and the audience must be within a relatively narrow field of view (or they see the edges of the screen). With careful matching of the lighting on stage and the lighting on the projected image, a convincing iilusion of an on-stage hologram is produced.

In Los Angeles, a Hologram ‘live’ music venue has opened up. This uses the Musion technique below. 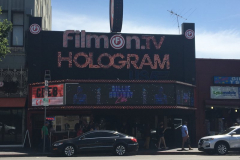 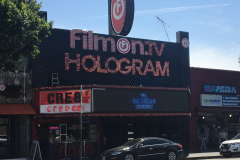 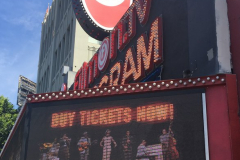 The Musion technique is also used in some theme park attractions. It was first used in ‘Disaster‘ at Universal Studios Florida, and subsequently in The Fast and the Furious: Supercharged as part of the Studio Tour at Universal Studios Hollywood. In this attraction, the effect works particularly well as the projected ‘holograms’ are synchronised with practical effects such as a full-size truck which rises into view on a lift, with the hologram of actor Vin Diesel riding on it.

Some live theatre shows claim to use holograms (e.g. Time and War of the Worlds Live) – this is usually a standard projection onto a featureless pale-coloured ‘head’, which appears to be a three-dimensional projection when lined-up and lit correctly.

The latest tour of War of the Worlds: The New Generation uses the Musion technique to bring a ‘hologram’ of Liam Neeson to the stage alongside live actors.