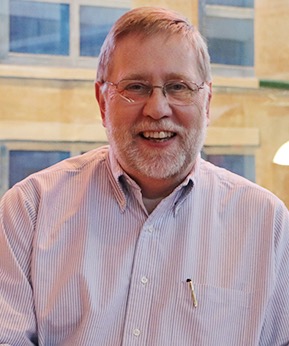 1971 – Production Electrician for the Dance Theatre of Harlem
1976: Joined Production Arts Lighting. Dealt with the installation & maintenance of the first computerised lighting control system on Broadway at A Chorus Line (more about the LS8 system)
1977 – 1981: Production Sound Engineer on A Chorus Line
1986: Chair of the USITT Committee that created the DMX512 lighting control standard
2001 – 2004: Led the Professional Service group at ETC
2004 – 2017: VP of Research & Development at ETC
2017 – present: Director of Standards and Industry Relations at ETC.
2019 – Winner of the Wally Russell Foundation Award 2018-19

Steve Terry on the Evolution of System Design in 2013

The Board of Directors of the Wally Russell Foundation is pleased to announce the winner of the 2018/2019 Lifetime Achievement Award is distinguished innovator, entrepreneur, and industry pioneer, Steve Terry. The award will be presented at the annual USITT Conference and Exhibition in Louisville Kentucky at a breakfast celebration. (Time and location TBD).

Terry is currently the director of standards and industry relations at ETC. From 2001 to 2004 he led the Professional Services Group at ETC, and from 2004-2017, he was the VP of research and development, and led the team that is responsible for global development of new products. During that era, his group was responsible for the development of many new technologies, including the transition to LED light sources and entry into the rigging machinery and controls market.

Terry began his professional career as the production electrician for the Dance Theatre of Harlem in 1971. He toured the world in that capacity for over five years, and the experience gained in that position served as the basis for many of his designs of touring equipment for the lighting rental market. In 1976, he was responsible for the care and feeding of the first computerized lighting control system on Broadway at A Chorus Line. From 1977-1981, he was the production sound engineer for that production.

Terry joined Production Arts Lighting in 1976, and was executive vice president and chief engineer until 1998. In that capacity, he led the Systems Integration and Consulting Group of Production Arts. He has been involved in the engineering and management of many prestigious installation projects over the last 30 years including, to name a few, the lighting renovation of the Metropolitan Opera House, the Lyric Opera of Chicago, the Mirage, Treasure Island, Bellagio, and Wynn hotels and the Fremont Street Experience in Las Vegas, the Lido de Paris nightclub in France, “Fantasmic” at Disneyland, six NBC network television studios, seven cruise ship showrooms for Holland America Line, and the Disney/ABC Good Morning America studios in Times Square.

Production Arts was acquired by PRG in 1998.

Terry has also maintained an active involvement in the international lighting industry for more than 35 years. He founded the USITT National Electrical Code Committee in 1980 and was its original chair. He was appointed to NFPA National Electrical Code Panel 15 in 1994, and continues to represent the USITT in that role today. He has been directly involved in the modernization of entertainment industry-related articles in the NEC from 1984 to today. He has also been instrumental in significant revisions to the NEC in emergency lighting control to accommodate the transition to LED illumination sources and new control technologies.

Terry is a member of a number of UL Standards Technical Panels, including those for UL924- Emergency Lighting and Power Equipment, UL8750-LED Equipment for use in Lighting Products, UL1008-Transfer Equipment, and many others. He recently chaired the UL924 task group that authored significant modernization to that standard relating to emergency lighting control.

In 1986, he chaired the USITT Committee that wrote the internationally accepted DMX512 standard for digital communications in lighting systems. He has been instrumental in moving the lighting industry towards the concept of systems integration rather than purchase from a single manufacturer. Systems integration is now standard practice in the lighting industry, and his work on the creation of DMX512 standard was a key element in making this possible. He was inducted as a Fellow of the USITT in 2005, and is a recipient of the USITT Joel E. Rubin Founder’s Award for his work on codes and standards.

Terry co-chaired the ESTA Control Protocols Working Group from its inception in 1994 to 2007. This working group produced important new control standards for the lighting industry, including ANSI Standard E1.17, Architecture for Control Networks (ACN) and ANSI Standard E1.20, Remote Device Management (RDM). He is currently a member of the ESTA Board of Directors, the ESTA Technical Standards Council, and the ESTA Electrical Power Working Group.

Terry is a recipient of the prestigious ESTA Eva Swan Award and is also an ETCP certified electrician, a member of the ETCP Council, and a subject matter expert for the ETCP electrical exams. He has been a frequent contributor to many industry trade journals and has authored many articles on control systems, codes, and standards.