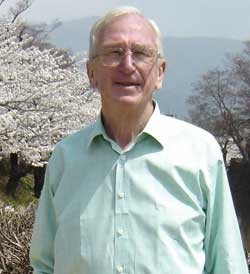 Robert was a pioneer of the use of scenic projection in the UK theatre.

Obituary from The Stage, January 12 2009
by Richard Pilbrow

Robert Ornbo was a brilliant lighting designer, whose work on more than 300 productions ranged from drama, musicals, opera and ballet, to events such as the Edinburgh Tattoo and the naming ceremonies of ocean-going liners. His influence has had a profound impact on theatrical lighting over the last 50 years.
The first lighting designer to join me at Theatre Projects in 1960, Robert became managing director of TP Lighting when its team of lighting designers, including Robert Bryan, John B Read, David Hersey and Andy Bridge, worked at the Royal Opera, the Royal Ballet, Glyndebourne, the English National Opera, the National Theatre, the Royal Shakespeare Company and across the West End.
Robert worked on such productions as The Merchant of Venice with Laurence Olivier (National Theatre at the Old Vic 1970); Hal Prince’s Cabaret (Palace Theatre London 1968) and Company (Alvin Theatre New York 1970 – Tony Award nomination), both with designer Boris Aronson; Pelleas and Melisande (Royal Opera House 1969), with designer Josef Svoboda; and The Ring Cycle (Coliseum 1971-1973), with designer Ralph Koltai.
It was The Ring Cycle that caught the attention of Buckingham Palace, where Robert began regularly lighting shows, including the 90th Birthday Concert for the Queen Mother in 1990.
Robert’s shows in the West End included 40 Years On, Voyage Around My Father, Habeas Corpus, I’m Not Rappaport, with Travesties and London Assurance both also on Broadway. He also worked widely in regional theatre as well as for the Royal Opera House, Kent Opera and Glyndebourne.
Lighting the opening season for the Sydney Opera House with the opera War and Peace started an international career, and in 1976, designing the lighting for the Bi-Centennial American Birthday Military Tattoo at Wolf Trap Washington DC, led to 20 years of revolutionary lighting for Tattoos.
The world of large-scale military spectacles opened up the field of other big events, from the Wedding of HRH Abdullah Bin Hussein (1993) in Jordan, VE and VJ Day Celebrations in Hyde Park (1995), to the Royal Dynasty Celebrations in Saudi Arabia in 1999. He became a specialist in lighting and eventually producing, the naming ceremonies of cruise liners, from The Oriana (1995) to The Ocean Princess (2000).
Robert was a member of the United Scenic Artists in New York, Equity, and the Society of British Theatre Designers; chairman of the Drama Panel of the Eastern Arts Association and joint president of the Association of Lighting Designers, of which he was a founder member. He also served as chairman of the Theatre Royal Bury St Edmonds. A marvellous communicator, Robert lectured widely in the UK and abroad, where his enthusiasm and skills inspired many young designers.
Born September 13, 1931 in Hessle and educated at Hymers College, Hull, he returned to England in 1951 after national service in the Far East and entered his father’s ship-broking business. But theatre called and he joined a group of touring actors. In London he landed a job at The Talk of the Town, before moving to the Princes Theatre, where he became chief electrician.
Robert was married to Rose Harris, whom he met while she was a production assistant at Theatre Projects. They have two sons.
Diagnosed with fibrosing alveolitis in 2001, Robert continued to live life to the full, despite an increasingly debilitating illness, supervising preparations for his son’s wedding in August, even though he was finally unable to attend.
Robert died on November 19, 2008, aged 77. His many friends and colleagues around the world will remember him as a true friend, always eloquent, humorous and witty. A loving husband and father, he took great pride in his two sons as they embarked on successful careers and marriages.
Richard Pilbrow