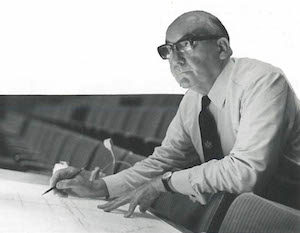 Thomas Joseph (“Joe”) Davis was the first in the UK to be professionally credited for doing the lighting (the role now known as Lighting Designer). He was also the first Chairman of the newly-formed Association of British Theatre Technicians (ABTT).

From 1984 ’42nd Street’ programme from Theatre Royal Drury Lane
Joe Davis was born in London and was responsible for designing the lighting of over 650 major productions, ranging from exhibitions, classics, plays, operas, cabaret and conventions.
He joined the Strand Electric in 1926, leaving after a few years to become Production Electrician for Charles B. Cochrane and Julian Wylie. In 1935 he joined H.M.Tennent Ltd and was their lighting engineer for 37 years.
He served with the RAF in Burma, and after the Japanese surrender toured the Far East camps with John Gielgud’s productions of Hamlet and Blithe Spirit. For 22 years he was the personal lighting director to Miss Marlene Dietrich, travelling with her to most major cities throughout the world.
His production credits include Blackbirds 1936, The Lady’s Not For Burning, Crime and Punishment (both with John Gielgud), The Deep Blue Sea with Peggy Ashcroft, John Gielgud’s Hamlet (London and Elsinore), Paul Schofield’s Hamlet (London and Moscow), Ring Round the Moon, The Power and The Glory, Irma La Douce (London and New York), The Visit with the Lunts, The Sleeping Prince with Laurence Olivier and Vivien Leigh, A Streetcar Named Desire with Vivien Leigh, Quadrille with the Lunts, Under Milkwood, The Heiress with Ralph Richardson and Peggy Ashcroft, Waters of the Moon, The Millionairess, The Kingfisher, Ross, The Glass Menagerie with Helen Hayes and Cause Celebre.
Musicals include The Most Happy Fella, West Side Story and On The Town.
Operas include Bomarzo, Julietta, The Nose and for the past four years he was the lighting designer for the Buxton Festival.
Recent productions include Godspell, Fiddler on the Roof (Vienna), Bugsy Malone, Hay Fever, See How They Run, The Aspern Papers, Morning’s At Seven, Passion Play, Children, Children, and at the Theatre Royal Drury Lane he lit the musicals Oklahoma!, My Fair Lady, Hello Dolly!, No, No Nanette and also Peter Brook’s The Tempest.
He was a Director of Theatre Sound and Lighting (Services).

Joe passed away in July 1984 just after conducting a lighting rehearsal for 42nd Street at the Theatre Royal Drury Lane.