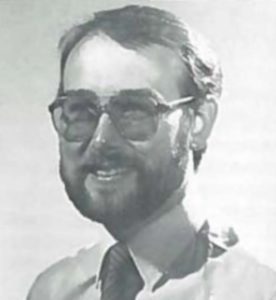 Andy Collier died on Friday 12 July following a heart attack while travelling to an ALD meeting in central London.

This appreciation is based on Andy’s (as ever self-effacing) autobiographical sketch, as published in the Profiles series by Entertainment Technology Press in 2000.
Andy never had the chance of a real career from birth. With a mother who trod the boards with comedian Ted Ray, and a father who worked in Rollo Gillespie Williams’ stage lighting emporium at Holophane, early ambitions of being a scrap metal dealer took second place to a childhood spent in and around the theatre. His first major role at the age of eight was disconnecting Strand 3-in-line plugs by prising them apart with a screwdriver. At-eight-and-a-half he learnt to isolate the circuit first.

After a brief flirtation with his University’s drama group (and its cast), and a once-in-a-lifetime gig at the Hammersmith Odeon where he attempted to perform a complex rock light show single handed on a Grand Master, Andy felt he knew all there was to know about being a theatre consultant and applied to Theatre Projects for a post. Michael Holden suggested a huge number of alternative career opportunities.

He duly joined Rank Strand Electric’s busy ‘specials’ department and within a very short time many of superiors had departed, leaving him in charge of an engineering department of 20 at the tender age of 24. Many famous special projects followed, including a custom MMS carry-cot module for Martin Moore’s secretary, an extendable ‘gnat’s cock rule’ for the retirement of the metalshop chargehand, and equipment for the National Theatre, the Barbican Theatre and Concert Hall, BBC Television Centre, the Royal Opera House, Kammerspiel Munich and La Scala Milan, and many theatres and TV studios around the civilised world, plus a few in Australia.

Offers from the management flowed in for Andy to work anywhere else, such as Strand’s outposts in Scotland, Los Angeles, and finally, Leningrad. The latter offered the greatest challenge as Strand had no facility or communication whatsoever in that part of the world, so on his return from a sentence at the Kirov ballet, he decided to get his own back and took the post of Product Manager for Controls and Dimmers in the marketing department. On the first day in his new job, Andy was informed that every one of the previous marketing team had just left. It still is not known if the two events were connected.

As the expert in controls and dimmers, he was appointed product manager for the new technology of automated lights. Having being present at the famous Strand board meeting where the ‘new’ Parcan device was presented, and roundly rejected by the burghers of the board as being a ‘flash in the pan’ and a fashion statement, he felt that the launch of motorised Parcans into the European marketplace would be worth a laugh. For the launch, he commissioned the Ballet Rambert to perform at Photokina, and devised a marketing campaign including posters, sweatshirts and colour brochures. The lights moved, but not in the right direction. Prompted by a tirade from Strand’s American management who concluded he was sabotaging their technology in Europe, Andy moved to Italy and to the fledgling Teatro, famous for Parmesan cheese and Mike Lowe.

After 48 months at Teatro and host to 52 groups of holidaying visitors, Andy, his wife Margaret and newly-arrived son Benjamin left behind a happy time in Italy to return to the UK and the unknown.

With all his past conveniently forgotten by a new Strand management, he was approached by David Brooks to join the revitalised Marketing Department in a fresh team which included Steve Norman in the USA and a young Edward Pagett, and which launched itself into new marketing initiatives for Europe, USA and beyond. However, all the senior management really wanted were more datasheets.

A disillusioned Andy left Strand and registered Technical Marketing Limited with David Brooks and Steve Norman with the aim of teaching the world about technical marketing. Starting with writing data sheets for stage lighting companies the company has consolidated its work as PR and Marketing Consultants for a range of well-known industry companies. The trio also authored Technical Marketing Techniques, published by Entertainment Technology Press in September, 2000.

Andy edited the Association of Lighting Designers magazine Focus and was an active member of its committee.  He also was a supporter of the Society of Television Lighting and Design.

Technical Marketing Ltd (TML) brought new challenges for Andy. The company mission was all about helping businesses with their marketing. Not just acting as a consultant and telling the client what to do, but becoming a valued member of the marketing team and directly involved in implementing the plan. Not only did this new role draw on all of Andy’s past experience that had brough him to this point, but caused him to develop new skills in the emerging worl of Internet marketing which then was just beginning to take off. Andy was an early advocate of the Macintosh OS, a journey begun at Teatro in developing new techniques to produce catalogues in a whole raft of different languages. On his move back to Strand he persuaded the management, despite a ban by the Rank Organisation, to invest in Macs and continued to develop the technical marketing tools that later also played a key role in the operation of TML.
TML was not only a marketing support company but – thanks to Andy – also an agent and positive advocate of a new silent dimming technology. Fourteen years later the company is well known in the industry and Andy was managing a portfolio of businesses. Recently Andy has been responsible for the marketing of the ABTT Theatre Show, successfully helping to establish it in its new venue alongside the implementation of a largely internet based publicity programme. Andy provided other services to the ABTT including the e-mailing of the monthly members’ newsletters.

Andy’s sudden death has come as a shock to all who knew him. The ABTT expresses its condolences to his wife Margaret and son Benjamin.