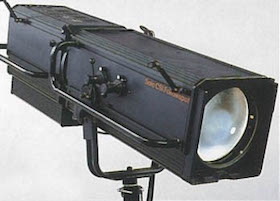 Introduced as replacements to the Patt 818 and 765 followspots in 1985. They have many advanced features and considerable light output benefit. The housings appear similar in shape but the CSI has a power bulge at the rear to accommodate the high voltage starting gear for the discharge lamp, and obviously a separate control ballast.
Solo 2K has a variable beam from 9° to 15° compared with the 818 12° to 21°. Therefore, in making light output comparisons, it is very easy to have a much higher intensity on the new unit at 9° when compared with the larger spot of the 818.
Discontinued in 1997

Catalogue & Journal Entries for Solo in the Backstage Heritage Collection