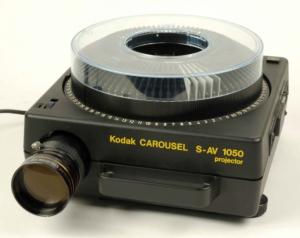 Based around the 80 slide carousel, containing 35mm transparencies mounted in a plastic frame.
The only solution to affordable scenic projection until digital projection rendered it obsolete.
The Carousel was used heavily, both in education and in entertainment.
The lower-end projectors had limited control (forward / back through the slides). However, higher-specification projectors had a multipin connector on the back, which provided remote control of those functions as well as a connection to fade in/out the projector lamp.
Using audio pulses on a tape soundtrack, multiple projectors could be synchronised to perform hugely complex sequences.
Early multimedia shows such as Mike Batt's The Hunting of the Snark in 1991 and The Who's Tommy in 1996 relied on the technology.

Back to Projection (Kodak)