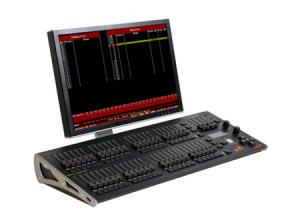 Jester 24/48 is perfect for small to medium show lighting applications where a greater channel count is needed. With a wide range of features, intuitive operation and great value, Jester 24/48 delivers outstanding performance show after show.

The three operating modes feature control in preset, program or playback including using a traditional theatre playback stack. The Jester 24/48 is a fully functional memory console complimented with on-board LCD display and plug-in monitor port standard. With 24 auxiliary buttons used to trigger DMX devices such as scrollers, smoke machines or strobes, MIDI capabilities, a USB port to backup shows and even a DMX In port for snapshot/backup use, the Jester 24/48 delivers truly wide user appeal.

Jester ML launched at PLASA in 2007
Jester ML was the first Zero88 product to use the RDM standard.
Offering all the features found in the existing Jesters consoles (monitor support, USB storage and easy patching) the new Jester ML’s also provide the tools needed to work effectively with moving lights, palettes, effects engines and a full fixture library.
Two versions of consoles will be available:
The Jester ML24 offers users control of up to 20 intelligent lights and 24 generics. Shows can either be recorded as a theatrical cue stack or by using 24 submasters.
The Jester ML offers users the ability to work with 20 moving lights and record these onto a cue stack if used as a stand alone console. Using the ‘DMX In’ it is also possible to link the Jester ML to existing Jester lighting desks giving users the option of adding moving lights to existing products at an affordable price.
Now, with the Jester ML consoles, the Leap Frog range and the Frog 2, users can select a control desk that will control from 20 to 200 plus moving lights, all using a similar programming philosophy.