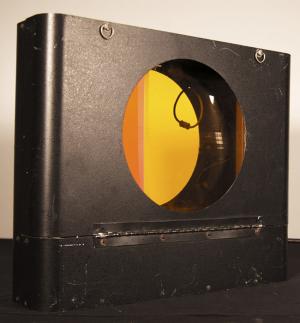 Jim Lenahan, the longtime LD for Tom Petty and the Heartbreakers was the very first designer to use the scrolling colour changer. He comments, "[Rigs at the time] looked like one colour, one focus, one light. If you needed another focus, another colour, you needed another light, and so, of course, everything was massive rigs of lots and lots lights just to do simple things that today we do with a few lights.

"Our standard rig in those days was 450 lights, and that was all pars and lekos and ACLs and a few odd bits and bobs here and there, you know - a beam projector or something like that. But mostly it was 1K pars and 1k lekos, and it was hot up here. But I was always trying out new things, and they had a colour changer back then that worked like the boomerang on a followspot and solenoids. It would actually throw in a gel, in a very similar way to a followspot colour changing system, and it was really terrible."

Lenahan heard about a colour-changing prototype while on the search for a new console and tracked it down to the source. "We went down to Texas to Keny Whitright's house to look at the first Colormax. Keny had it set up in his garage, and he had a Commodore 64 computer to control it, which was high-tech stuff in those days. It wasn't in a housing or anything yet. It was just computer step loaders and a scroll between them, mounted on a bench, and a bunch of gel, taped together. And it was like, 'Okay, watch this,' and he'd punch a couple numbers into the computer, and zip! it'd go to a colour, and then another couple of numbers, and zip! it'd go to another one. It was like, 'Oooooh, aaaah.' I'd never seen anything like that. It could roll to a precise point and stop. So I had to have one of those.

"And so I was the first person to take Colormax on the road. It was all analogue in those days. The control was analogue - I remember the old board very well. It had buttons that you'd push that would light up. There was a grid of these buttons; let's say there were 10 buttons high and five buttons across, and so that meant you could have 10 channels, or however many colours of gel, there were that many buttons. So you'd punch button one on light one, and it would go to colour number one, and it would light up and would be lit solid. And then you could punch another button, say light one, button number four, and it would start blinking. That meant it was ready to go to that other colour."

The scrolling colour changers made by Wybron are everywhere, from megachurches to high schools to cruise ships and retail stores, but even in a day when additive LED colour mixing is on the forefront, Lenahan thinks that the scroller retains viability. "They're still a great way to go."

Back to Colour Changers (Wybron)

502
<!-- NOTES Use BOOTSTRAP for max mobile compatability THIS MEANS ALL CUSTOMISATION OF TEMPLATE HAS GONE! ALSO NEED EQUIPMENT CATEGORY SLUGS