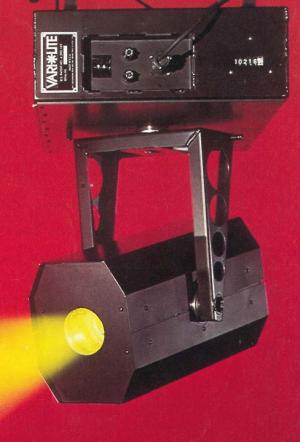 The VL1 (Series 100) used dichroic filter, mounted onto three wheels with seven filters each, plus an open position. A fourth wheel was fitted with five beam apertures and two gobos. Pan and Tilt used servo motors, and intensity was controlled by an iris at the front of the head.

The Upper Enclosure (UPE—the "box" on which a moving head is mounted) contained the power supply for the lamp (the APS250) and a Data Receiver Card—a PCB which translated the cue information received from the console into low voltages; these were then (mostly) sent via a wiring harness to a servo amplifier card in the head, which provided the actual power that drove the motors. The Data Receiver Card also translated the lamp Start and Douse commands from the console and fed them to the APS, allowing the lamps to be switched on and off remotely, by the console operator.

The original choice of lamp—the GE Marc 350 projector lamp, a discharge lamp with a daylight colour temperature caused several problems and a less powerful, 250W lamp had to be substituted.

The Osram HTI 250 was selected as the replacement lamp for the new VL2 after the company experienced significant troubles with the original GE MARC350 lamp. Quality issues led to limited supplies of the lamp being available and the company did not want to base a new product on the MARC350. Vari-Lite eventually tried the HTI 250 in the VL1s for the same reason, lack of supply of good MARC350 lamps. They also tested the Philips MSD 250 lamp in the VL1 with some success. They had a projected lifetime of >1000 hrs, but by that time the VL1s were nearing retirement.

860 units were built between 1981 and 1984. Most of them were destroyed, but some four units are reported to still survive, two at PRG and two built from spares are in private hands. Some units were stolen, and may also still survive.

Catalogue & Journal Entries for VL1 in the Backstage Heritage Collection