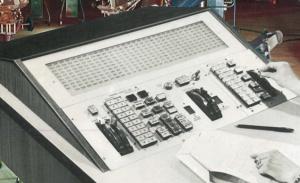 Lots of additional information and resources coming in the next few weeks.
Sold in the USA by Kleigl from 1970.
System designed by Mr. A. Isaacs

The Q-File was first installed in BBC TV Centre in TC8, believed to be in 1967.

The wonderful TV Studio History website has this information:

"TC8 was also the first studio with thyristor dimmers controlled by a computer memory console – the Thorn Q-File. This console was subsequently installed in TV Theatre and all the other studios at TVC except TC6 and Lime Grove D and E.  These three studios were equipped with the Strand MMS – ‘Modular Memory System.’  This was a console with fader wheels rather than the motorised  faders of the Q-File.  It had a slightly different operating philosophy from the Thorn desk which some liked, others not.  It was in fact the predecessor to the Galaxy – without question the best lighting console ever developed for TV studios.  For many years, almost every studio in the UK was equipped with one – they were available to purchase, in improving versions, from the early ’80s to the mid ’90s.

Their manufacturer, Strand Lighting, offered no similar replacement when they stopped manufacturing them.  Unfortunately, they and all the other console manufacturers subsequently sold  consoles that were aimed at the theatre and moving light market.  Very few operators or LDs believed these were as suitable for television as the old Galaxy.  Thus, these old lighting desks soldiered on until the last one at Pinewood in 2015.  Spare parts were acquired from old consoles being replaced in theatres or studios all over the world.  The BBC even bought an old second hand Galaxy from Russia.

TC7 and TC8 were later equipped with  a radical re-development of the Q-File called the ‘Thornlight.’ It had obviously been designed by a committee and was in some ways rather clumsy to operate.  However, once you got the hang of it it was extremely flexible and I personally really got to like it.  These were later replaced by Galaxys, as eventually was TC6’s MMS, until by the late 1980s the only studios still with a Q-File were TC1 and Television Theatre."

Catalogue & Journal Entries for Q-File in the Backstage Heritage Collection

Back to Control - Memory (Thorn Lighting)