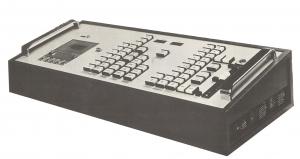 A small (possibly 12-way) prototype was built and was demonstrated at the Mermaid Theatre.
A 96-way version was commissioned, but it failed to work in any way. No others were built.
Nick Hunt's website contains a number of accounts of what happened, and paperwork that was used during the ensuing battle between the manufacturers and users of the equipment